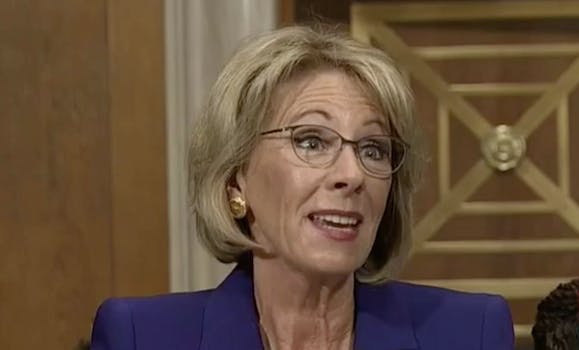 Social media had some fun last night at the expense of Betsy DeVos.

Somehow, a hearing for America’s next education secretary became the must-watch political event of 2017.

On Tuesday evening, it became clear that Democrats believed Donald Trump‘s nominee, Betsy DeVos, was unqualified to helm the Department of Education and would not relent in their questioning. To many Democrats, DeVos answers were lacking, leaving them very concerned about her fitness for the position.

But to Twitter, DeVos’s evasive, unusual, circuitous responses were the perfect fodder for what the social networking site does best: mocking the ever-loving crap out of someone.

DeVos may make it out of committee. She did not escape the internet unscathed.

Hi I'm Betsy Devos and this is Jackass

Q: should children be forced to work in coal mines during recess
DeVos: that should be left up to the states

"No one could be more unqualified than Ben Carson"
DeVos: "hold my beer"
Me: "that's a Tonka trunk"
DeVos: "I don't know the difference"

In defense of Betsy Devos, there's a greater chance of grizzly bear attacks than someone pretending to be trans to pee in girls' restroom.

COMMITTEE: Can you commit to not eating children
DEVOS: First of all thank you for asking. If confirmed I hope we can discuss whether or not

Watching the Betsy DeVos hearing is like watching a car crash, except the car is crashing into every school in America

Betsy DeVos would do a killer job running one of those orphanages where the kids just sing about how sad they are all day.

Check out this raw footage of Senator Al Franken going in on DeVos's belief in conversion therapy last night pic.twitter.com/Vv1NctwR6s

Senator: Ms. DeVos, what do you see as the role and mission of the Department of Education?
DeVos: pic.twitter.com/iVfTM8SyAC

Yea, that one just about sums it up.

A committee vote on DeVos is slated for Jan. 24. Here’s hoping every one of these is entered into the public record.