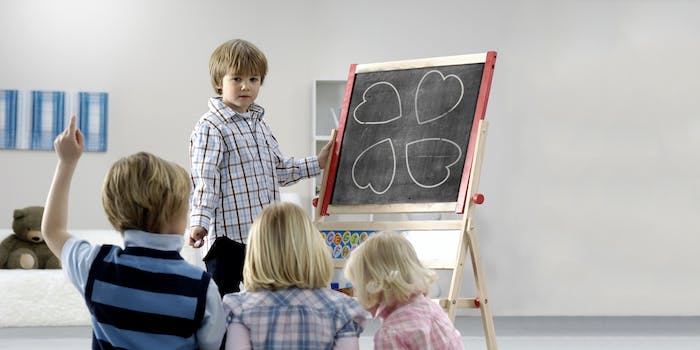 Photo via www.audio-luci-store.it/Flickr (CC BY 2.0) | Remix by Fernando Alfonso III

A user’s guide to the world of 4chan beyond /b/

4chan gets a bad rap. That’s entirely deserved. But outside of /b/, it’s not all hate and homophobia.

4chan gets a bad rap. That’s entirely deserved: It can be a horrible, noxious, occasionally dangerous place that breeds hate and uncertainty in every generation it touches.

But I can’t help but check in on the community now and then. You never know what you’re going to get: conjoined twins, a dude whose genitals got stuck in a roll of tape, a hoax feminist campaign, or NSFW toast engraving. As the rest of the social Web becomes a predictable feed of the same viral news stories, you learn to expect the unexpected on 4chan. I can never get enough of it. Maybe that means I’m sick, but I’ve embraced it.

/b/, the “random” imageboard on 4chan, is easily the most popular and also the most notorious. Here you’ll find a lot of racism, misogyny, petulance, and abject perversion. But outside of /b/, it’s not all like that. While still occasionally ugly, some boards beyond /b/ serve as places where you can actually communicate like a human being. If you’re new to 4chan, skip /b/ and start here.

Television dominates most casual conversation these days, in a way that might be detrimental to Western society as a whole. (Seriously, I don’t want to sit quietly at a dinner table while everyone else talks about House of Cards anymore.) That being said, actually participating in those conversations is a lot of fun, especially when you sprinkle in the wild streak of 4chan anonymity. You’ll find very impassioned, resolute pleas for Neill Blomkamp’s relevance alongside “does anyone else think Toot from Drawn Together was hot?” discussions. Both highbrow and lowbrow, willing to discuss The Americans and The O.C. If you need a break from the A.V. Club’s handwringing, /tv/ is a good place to start. 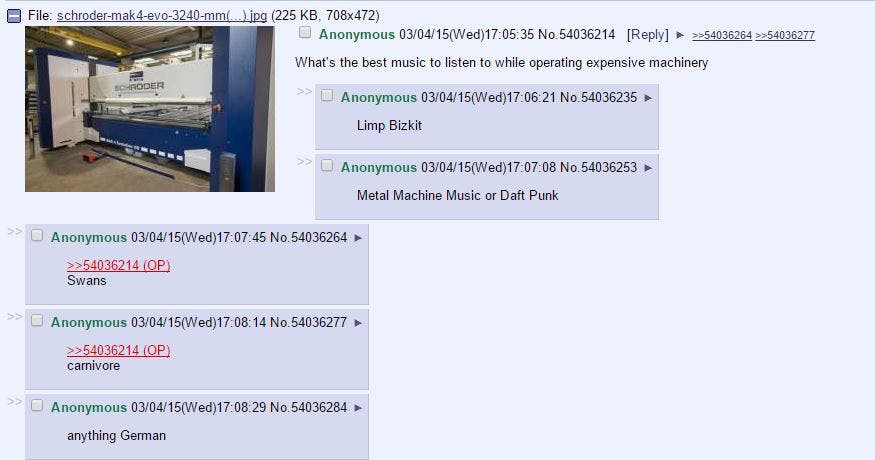 In a world where all the traditional gatekeepers of new music are hemorrhaging blood as they try to figure out what’s relevant, what’s trending, and what’s good in a music industry that’s completely lost its identity, I find myself occasionally turning towards /mu/ for some pretty solid recommendations. Yes it’s still covered in mucus like the rest of 4chan, but if you want to know what’s truly next-level, usually the 16-year-old lifers are a pretty good source. It’s also fairly non-discriminatory as far as music boards go, you’ll find threads about K-pop and hardcore among the more obvious indie rock and hip-hop themes.

The 4chan video game board (/v/) is often too chaotic, choking with wincing Gamergate rants for it to ever be worth a visit. I prefer the Video Game Generals board, which was established for threads about specific games or franchises to thrive outside of /v/’s troublemaking. It’s a wonderful pace to get clued in on esports gossip, or to simply tell stories about your Civilization campaigns. Yes, there’s a chance you might slip and fall into the hentai-covered Visual Novel thread. But that’s OK, you’re better off embracing it.

“Hey, I just want to see if anyone knows some crazy folklore or stories that not a lot of people talk about, mostly just wanting to see whats up”

Not for the faint of heart, and not for anyone who likes reasonable people, /x/ is a mysterious land full of kids desperate to convince themselves that they’ve been abducted by aliens or have been imbued with magical powers. I love it for its oddness, if not its factual accuracy. Remember 12/21/2012? That day at the “end” of the Mayan calendar that was supposed to bring pestilence and pain unto the mortal plane? Yeah, you bet I was on /x/ that whole day.

“This is the exact moment Peyton decided to take a pay cut.”

As diverse and interesting as the the Internet is, nerds don’t have a great place to talk about sports. You can go to Reddit and trudge through all the depressing, happy-go-lucky pandering, you can submerge in the brats-and-dads anti-humor of your average ESPN comments section, or you can throw caution to the wind and go to 4chan.

I’m a big fan of /sp/. You’ll find consistently updating game threads for whatever you fancy, as well as a slew of general discussions for every league, European or American, under the sun. It’s also a pretty good place to talk, and laugh, about wrestling.

I tend to prefer my sports with a healthy amount of shit-talking. 4chan being 4chan, that is /sp/’s greatest strength. If you want to laugh really hard at the absolute anarchy that goes down whenever the U.S. scores a goal against Portugal, this is where you need to be.

“Lifting for less than a year and I bench 2.5+ plates for reps.”

Take the general intersectional absurdity of 4chan, and blend it with a health and wellness board, and you have /fit/, easily one of the weirdest places on the internet if simply because of how specific the niche is. There aren’t a lot of people who are really concerned about their body who also spend their time on anonymous image boards. That’s what makes /fit/ so wonderful. I don’t spend a ton of time there, but I’m absolutely happy it exists.

I don’t have the brainpower for /sci/. At all. It’s why I’m blogging for a living. However, even if you’re not a math guy, you should spend some time on this board. It’s basically just a bunch of kids posting excruciatingly difficult physics, chemistry, and calculus problems, and then shit-talking each other when they can’t figure it out. It’s one of the few places on the Internet where you can be a tough guy about trigonometry. That rules on a purely anthropological level.

“Are white guys attracted to their sisters??? I’m a black guy, so I’m not attracted to black women, and therefore don’t need to worry about being attracted to my sisters.”

You should never ask 4chan for advice. But sometimes it’s funny to watch the people who do.

“Welcome to the moth pony thread!”

Photo via www.audio-luci-store.it/Flickr (CC BY 2.0) | Remix by Fernando Alfonso III