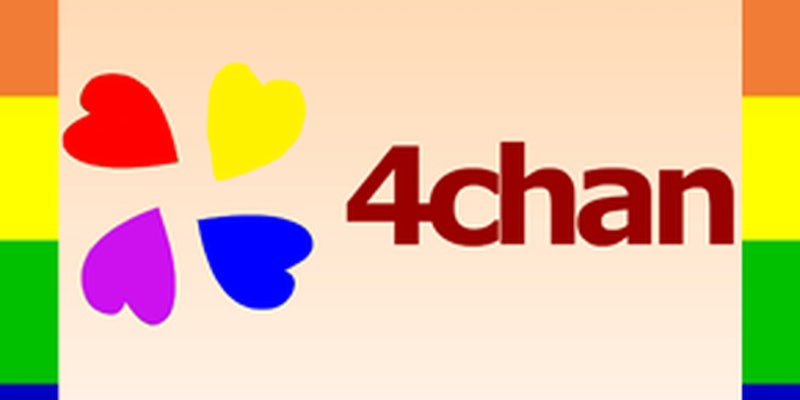 LGBT movement finds an ally in the most offensive site online

4chan, a site best known for crude pranks and filthy language, has created a new forum for the LGBT community.

Whether you’re black, white, heterosexual, or gay, on 4chan you’re always some sort of “fag.”

4chan’s random imageboard, /b/, is one of the most vile and profane corners of the Internet. It’s unapologetically racist and misogynistic, having recently tried to vote an all-white starting lineup into the 2013 NBA All-Star game and get developer advocate Adria Richards fired after she called out attendees of a tech conference on Twitter for making a sexual joke.

The New York Times likened the forum to “a high-school bathroom stall, or an obscene telephone party line.” Users trade obscenities there like currency, posting an endless stream of foul language and crude images. Most posts contain some variation of the derogatory term “fag,” whether describing a veteran 4chan user (“oldfag”) or someone who dabbles in art (“drawfag”).

Yet through all of this vitriol, or perhaps in spite of it, a new safe haven for the LGBT community has emerged.

This is not a late April Fools’ Day joke or an elaborate hoax for the lulz. The Internet’s most notorious troll forum—a place where meaningful discourse is shrouded in juvenile innuendo or derailed completely by graphic images of genitalia—is taking a stand for gay rights.

On March 18, /lgbt/ was launched by 4chan, along with boards dedicated to alternative sports, graphic design, the outdoors, and retro video games. Each community was started anonymously and has been added on a trial basis.

Of course, 4chan has always been about far more than just /b/. The site, launched in 2004 by Christopher “moot” Poole, currently hosts over 40 different imageboards, focusing on topics like music, politics, and travel, and most of them aren’t nearly as raunchy as /b/. Users share fashion advice on /fa/, encourage each other to get in shape on /fit/, and trade recipes on /ck/. In January, 4chan’s auto board, /o/, even helped police track down a group of California drivers who stopped traffic on a highway to do donuts.

Yet given 4chan’s general reputation, the addition of an LGBT-positive community—the site’s first board devoted to a serious societal issue—was notable, and the response to it even more so.

The board boasts more than a dozen active threads, touched on heavy topics like reproductive rights, gender, and same-sex marriage. Instead of trolling, the conversations reveal an earnest side to online anonymity, allowing users to open up about personal issues—hair removal, hormone therapy, coming out—without fear of reproach.

/lgbt/ has already featured a handful of posts from people asking about their bodies, how to dress, and different sexual orientations. For example, the /lgbt/ community provided the following advice to a guy struggling to identify as bisexual or pansexual. 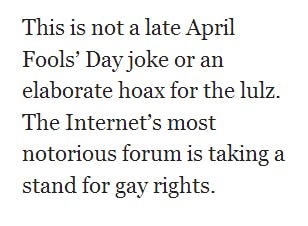 “There are two sexes (well in all practicality, anyway),” user NeverTrollin commented. “Yes there are also hermaphrodites and pseudo-hermaphrodites of all sorts of chromosomal makeup, but there are more than two genders. You are pansexual if you are attracted to people of those other non-binary genders, as well as two the binary two.”

It’s difficult not to see the symbolism in 4chan’s actions. Last week, as the Supreme Court considered California’s Proposition 8 and the Defense of Marriage Act (DOMA), more than 2.7 million Facebook users changed their profile photos to the “Red Equals Sign” in support of marriage equality.

With /lgbt/, 4chan not only enters the national conversation but manages to do in a civil and thoughtful manner. (Unfortunately, the handful of threads about marriage equality on /lgbt/  have since been bumped offline, due to 4chan’s lack of an archive system.)

It’s a bold and necessary step for a site that has long been preceded by its reputation.

If the Internet’s most notorious site can embrace and respect the LGBT community, perhaps the rest of the Internet can’t be too far behind.