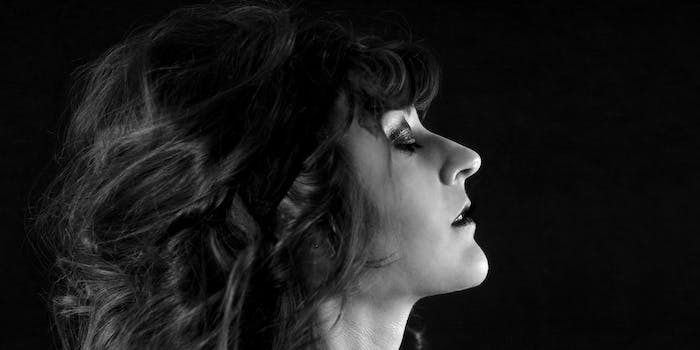 What is the Fourth Wave of Feminism and what does 4chan have to do with it?

Surprise: feminism is too complicated for a site full of historically ignorant dudes.

4chan should have quit while it was ahead.

/b/, 4chan’s random imageboard and infamous prank hub, began spamming social media with photos of bikini bottoms Monday morning. The community manufactured Twitter accounts, submitted stories to the community pages for BuzzFeed and CNN, and Photoshopped image macros of women in two-piece bathing suits. The goal was to make the bikini bridge “the next big thing”—perhaps the next thigh gap. The next great symbol of thinspo.

A day after launching the hoax, /b/ was knocking back celebratory drinks. The plan was working: The hashtag #bikinibridge had been mentioned in more than 4,000 tweets. The “trend” was mentioned in ABC News and the Sydney Morning Herald. Some publishers, like the New York Daily News, appeared to take the bikini bridge seriously, calling it something that “will likely do real damage.”

But like the bunch of overzealous teenagers they are, /b/ wasn’t satisfied. The community, as well as its politics (/pol/) board, piggybacked on bikini bridge with Operation Fourth Wave Feminism, an effort to emphasize “the attractiveness and sexualization of skinny and fit female bodies (and perhaps for added lulz, underweight females, but that may or may not be feasible).” /B/’s wanted to push this agenda so hard that it pitted feminists against one another. (Click to enlarge.) 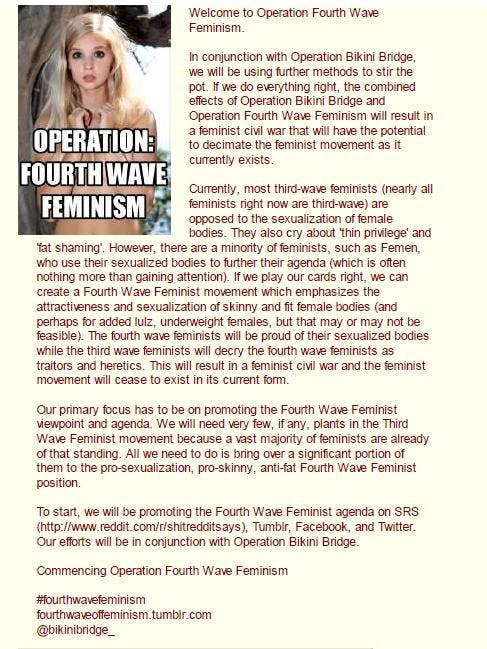 To help spread their poison, /b/ and /pol/ created a subreddit, Facebook page, and a handful of Tumblr blogs. None of them, including the Twitter hashtag #fourthwavefeminism, have gotten any attention. Because unlike bikini bridge, Operation Fourth Wave Feminism was fatally flawed from the very beginning because it has no grasp of the different waves of feminism.

The first wave of feminism started in the 1950s and focused on the need for basic gender equality. The second wave dealt heavily with female autonomy and sexual politics. Women identifying with the second wave tend to place a lot of emphasis on the female body and deconstructing gender roles. The third wave—the one 4chan thinks it’s fighting—arose out of postcolonial theory, and focused on the idea that in order for feminism to be successful, feminists should advocate for the equality of all marginalized groups regardless of their collective identity. This idea encompasses women of all shapes and sizes, and includes women who are proud of their sexuality.

The idea that /b/ hoped to stir up trouble with Operation Fourth Wave is laughable because third-wave feminists already work to empower thin women as well as everyone else. Not to mention that there’s already plenty of tension between second and third wave feminist thought without dragging the trolls into it. As one /pol/ user put it, the operation’s bogus theoretical framework was its ultimate demise.

Boobs, juvenile pranks, and raids are all 4chan really knows. Feminism is too complicated for a site full of historically ignorant dudes who consider women just a place for their dicks.

Aja Romano contributed to this report | Photo by josemanuelerre/Flickr