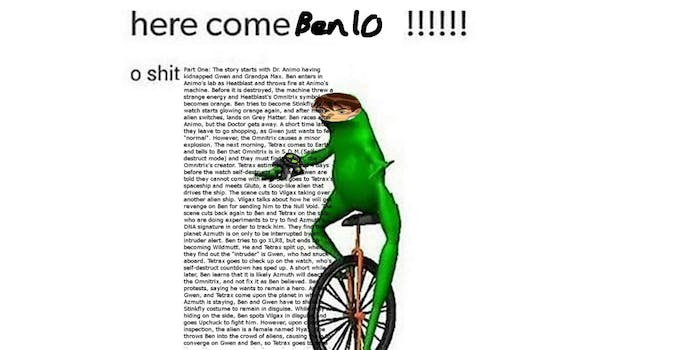 This summary of a kids' show is Reddit's most popular comment right now.

All over Reddit, people want to catch you up on the events of the action cartoon Ben 10. You can’t read a comment thread without seeing the 1,046 magic words that start with, “Part One: The story starts with Dr. Animo having kidnapped Gwen and Grandpa Max.”

Copypasta, the internet tradition of copying and pasting extremely long chunks of text into comment threads or forum posts, is as old as the concept of internet memes themselves. The term was first coined on anarchic messageboard 4chan in the mid-2000s, but it’s spread across all of social media over the past decade. Copypasta can be horrifying or hilarious, the only requirement is that it’s long and that it’s repeated over and over.

The Ben 10 Copypasta, which describes episodes 44 through 46 of Ben 10: Secret of the Omnitrix, has fulfilled both of those requirements. The full story is more than a thousand words long, and it’s being repeated all over Reddit. Here’s the text in case you want to participate in the meme:

Many find copypasta annoying because it’s repetitive by nature, but the Ben 10 Copypasta is being used on Reddit as a commentary on what people consider stale memes. Four memes have dominated the site in January: Logan Paul’s ‘suicide forest’ video, Tide Pods, Somebody Toucha My Spaghet, and, most prominent of all, Ugandan Knuckles.

The Ben 10 Copypasta now pops up in the comments whenever one of these memes is posted, reminding everyone how tired and repetitive they are. Knuckles, with its massive popularity and oft-parroted  “show me da wey” is especially guilty of this.

It’s not that Reddit suddenly spawned a huge Ben 10 fandom—although the show is beloved by kids, and is Cartoon Network’s longest-running franchise at 12 years and counting— it’s just that the world needed a new copypasta right now.

In addition to the text itself being spammed, memes about the Ben 10 copypasta and its role as a counter to Ugandan Knuckles have also been popping up:

The Ben 10 Copypasta is the latest in a distinguished lineage of memes that includes the Navy Seal Copypasta and the Ken-sama Copypasta. Although they’re years old, they still keep popping up, bringing a little surprise and a little nostalgia to the internet. Will Ben 10 stick around, or is it merely the antidote Reddit needed to a boring meme market?

Only time will Part One: The story starts with Dr. Animo having kidnapped Gwen and Grandpa Max. Ben enters in Animo’s lab as Heatblast and throws fire at Animo’s machine. Before it is destroyed, the machine threw a strange energy and Heatblast’s Omnitrix symbol becomes orange. Ben tries to become Stinkfly, but the watch starts glowing orange again, and after many alien switches, lands on Grey Matter.