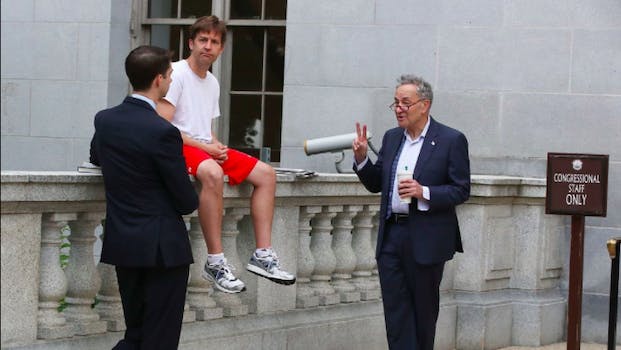 Everyone is loving this photo of a Republican senator being chill

He cracked a funny, which we all needed.

This morning, at the tail end of an absolutely crushing news cycle, Sen. Ben Sasse (R-Neb.) posted a lighthearted tweet.

He was spotted hopped up on a stone wall at the Capitol in workout clothes, an impish Huck Finn-esque perch, entertaining other senators as they passed by. Sasse got a hold of the pics and cracked a funny.

If you thought that was ripe for jokes, well, let me tell you something.

It was ripe for jokes.

There was the obligatory alterations of marijuana cigarettes.

Naturally the joke you expected to happen, happened.

There were some burns regarding the administration’s revamped stance on drugs.

Jeff Sessions will have you arrested for joking about thishttps://t.co/WmNMavF9b8

Sen. Chuck Schumer (D-N.Y.), who was in one of the pictures referenced by Sasse, got in on the fun.

The Free Beacon held a caption contest, which got some good responses.

Schumer: Have you guys heard about romphims?

But one representative won it all, with this call back to a news story from the night before.

All in all, I think’s safe to say this photo saved American democracy.