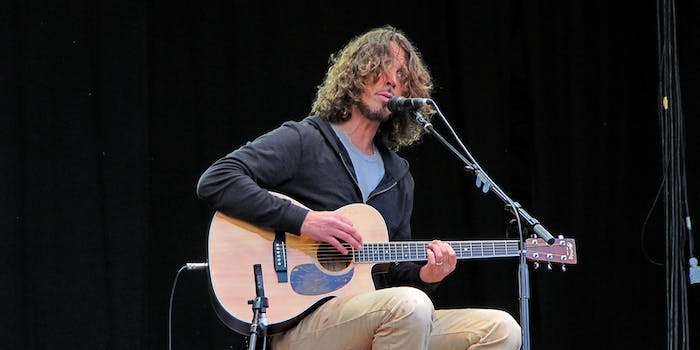 Chris Cornell, lead singer of Soundgarden and Audioslave, dead at 52

He played in Detroit just hours before his death.

Chris Cornell, the lead singer of Soundgarden and Audioslave, died late Wednesday in Detroit. He was 52.

Cornell’s representative, Brian Bumbery, confirmed the singer’s death in a statement, describing it as “sudden and unexpected,” and Cornell’s family asked for privacy.

“Chris Cornell passed away late Wednesday night in Detroit, MI,” Bumbery said. “His wife, Vicky, and family were shocked to learn of his sudden and unexpected passing, and they will be working closely with the medical examiner to determine the cause. They would like to thank his fans for their continuous love and loyalty and ask that their privacy be respected at this time.”

According to reports, he was found dead in his hotel room in Detroit by a friend.

Cornell was born in Seattle in 1964 and became one of the most prominent and influential singers of ’90s grunge music. He formed Soundgarden in 1984 with Kim Thayil and Hiro Yamamoto, who released two EPs before their first album, Ultramega OK, came out in 1990. They released several albums throughout the ’90s, with many of their hits, including “Black Hole Sun,” “Rusty Cage,” and “Spoonman,” becoming staples of the era.

He also had an impressive career as a solo artist, which includes writing and performing the theme song for the James Bond movie Casino Royale. More recently, he got back together with Soundgarden and was touring the country.

His death stunned the music world and fans of his music, who took to Twitter to remember him after they learned the news.

Shocked and saddened by the sudden death of @chriscornell. A great singer, songwriter and the loveliest man. pic.twitter.com/Hwdgst8kmg

Chris Cornell's lyrics + voice have loomed large for me since '94. "Fell on Black Days" now playing in tribute. Damn. May he rest in peace. pic.twitter.com/lVSDCJXX9O

While he promoted the original song he wrote for the film The Promise last month, he told CBS This Morning that a new Soundgarden album was in the works—although he didn’t put a timetable on when it would come out.

Last month @ChrisCornell sat down with @AnthonyMasonCBS. He told us he was working on a new @Soundgarden album. pic.twitter.com/2BxaemIkR7

Just hours before his death, Cornell and Soundgarden played at the Fox Theatre in Detroit, where fans watched what would be his last performance.

Update 1:31pm CT, May 18: A medical examiner has ruled Cornell’s death a suicide by hanging. A full autopsy has yet to be completed.