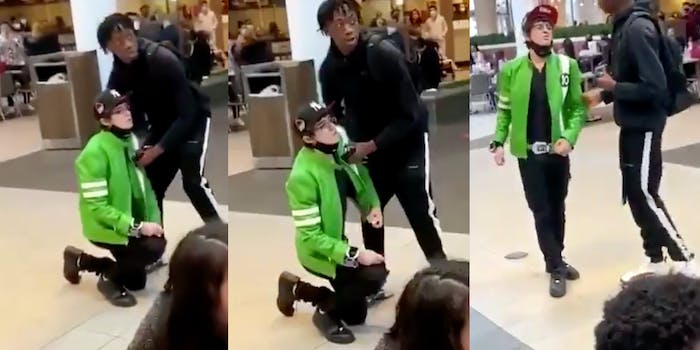 Luckily, two people helped him up and consoled him.

Ben 10 is trending on Twitter, and no it’s not because of another reboot.

The sudden interest in the animated series is most likely due to a viral TikTok video showing a man’s failed proposal inside a mall food court––and his interesting choice of attire.

The video shows a woman walking away from a man dressed in a bright green Ben 10 jacket and Omnitrix, his knee pressed to the Menlo Park Mall food court floor in New Jersey.

The reuploaded video has been viewed over 7.7 million times by viewers outraged, saddened, and amused over his fashion choices.

“He even had that Ben 10 drip,” one user commented.

The look in question was completed with a pair of all-black Air Force 1s.

“She was probably scared of the black Air-Forces,” another said.

The couple is almost fully surrounded by onlookers watching as the man stands there seemingly shocked. Luckily, two others are seen starting to help him up and console him.

The video was also uploaded to Twitter, where it even garnered a reaction from the official New Jersey account.

The man proposing is Matt10, a YouTube vlogger who originally uploaded the video to his TikTok and YouTube accounts.

“I proposed to my girlfriend of three years and this is what happened,” a caption from his original TikTok says.

Whether this was all an elaborate prank or not remains unconfirmed. He does appear to be an actual Ben 10 fan though.