The bizarre and fascinating world of bedbug message boards

Come for the info, stay for the horror stories of butt rashes. And the sexy calendar.

There’s a lot of hysteria and misinformation on the Internet about bedbugs, so let’s just get one thing straight: These vermin are coming for you with a dead-eyed wish to feast on your blood, fuck each other to death, and hatch millions of their offspring all around your sleeping body.

Now that that’s cleared up, let’s have a calm look at the world’s most high-stakes message board, Bedbugger.com.

It’s a simple WordPress-based website that hosts a monumental forum for all things bedbugs. This Dickensian scourge was nearly eradicated in the mid–20th century, but between the ban on DDT, the rise in international travel, and some foolhardy archeologist reading from an ancient cursed scroll (probably?), the hostel-loving bloodsuckers are back and better than ever in cities across the world.

There’s no place on the Internet quite like Bedbugger. I entered hungry for info, but stayed for hours reading stories about people’s butt rashes.

I was hooked as soon as I saw the header.

My bedbugs found me while I was making out in a movie theater during the first 20 minutes of Lincoln (technically known as 16th base). We hopped in a cab to my place before Tommy Lee Jones’s wig started talking. I thought the worst consequences of bringing someone home on the first date would be guilt, pregnancy, or picking up a new brand of HPV, but as it turns out, bedbugs are the only STD that doesn’t need any S to get T. My date and I both woke up covered in giant welts.

I really wish I’d found Bedbugger.com right away, because my instincts about how to address the situation were dead wrong. I decided the best thing to do was come home from work, keep all the lights off, take a flashlight and a knife, and slash open my mattress in the dark while sobbing. I found nothing. Just to be safe, I sprayed my entire bed with rubbing alcohol. A few days later, I marched into my dermatologist’s office holding aloft a Ziploc bag with a spider in it, traumatizing her for life.

This was not the way to win the war.

After discovering Bedbugger via Google and reading a few posts, I discovered it was a terrible idea to cut open my mattress. I also learned that dousing my room in alcohol was a fantastic way to start a house fire. Third, dermatologists can only determine if your bump is a bite; they can’t tell you the specific species that did it.

I am sorry, Dr. Judith Hellman. 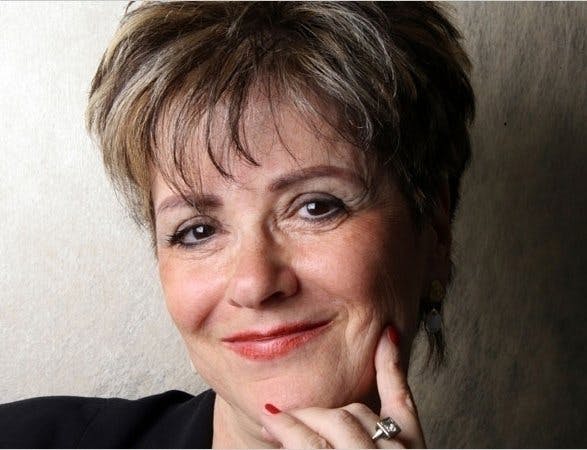 I wanted to know the right way to solve my problem, and Bedbugger had everything I’d need to get through every stage of the process.

The site was started in 2006 by an anonymous user named Nobugsonme, who describes herself as “your host, bed bug warrior, writer, [and] website janitor.” She has more than 17,000 posts on the site. The site is not only moderated by a small army of civilian bedbug haters, but also by professional pest-control operators, primarily David Cain, a pest-control operator (PCO) residing in London. Cain has logged nearly 2,150 hours on the site. In addition to running his own pest control business, he manages to respond to at least a dozen posts a day on most days of the week, free of charge. Most of his posts tell people their pictures are of things other than bedbugs, such as carpet beetles, bird mites, alfalfa weevils, lint, mildew, or even “ear cheese.” 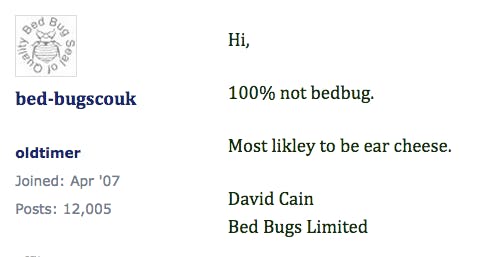 The first impression one gets from the site is its users’ sheer panic and desperation. The words “please” and “help” are used in a majority of the post headings. 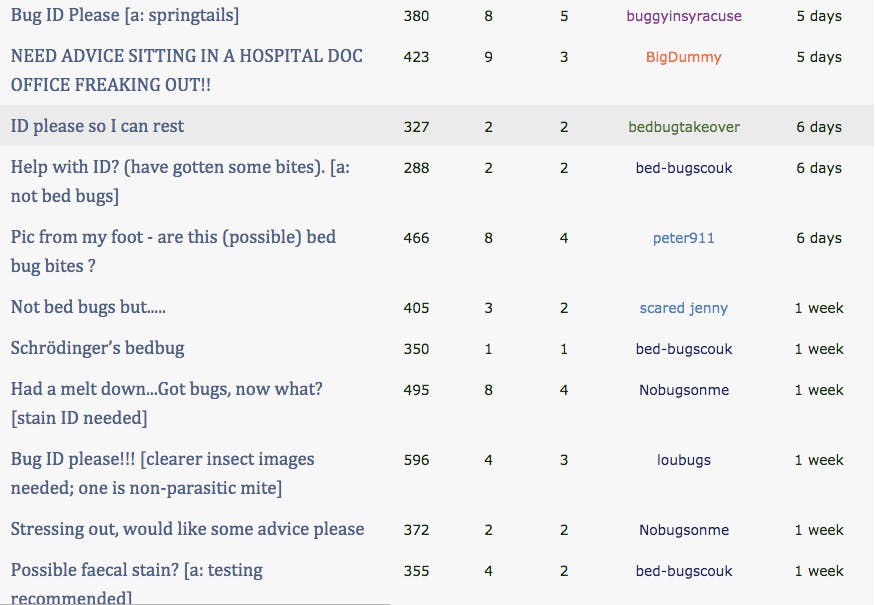 Most of the posts are people asking if they have bedbugs. The other popular topics are questions about treatment and non-chemical methods of pest control (including heat, freezing, sniffer dogs, and the less-advisable use of kerosene, milk, and “bedbug-killing nanobots”). But most of all, you’ll learn that the best part of having bedbugs is telling war stories about bedbugs.

Most of the users I spoke with agreed that the site’s most important function is providing emotional support to the bedbug-afflicted. Between feelings of shame, rejection, and fear, dealing with a real or perceived bedbug infestation can cause anxiety, depression, and in rarer cases, post-traumatic stress disorder and suicide.

In a post titled “Im gonna commit suicide,” an 18-year-old woman describes how bedbugs were ruining her ability to prepare for med-school exams, which was driving her to end it all. Both Nobugsonme and David Cain contacted the woman directly to make sure she was safe and had everything she needed, including a visit from Cain’s company. As it turned out, she didn’t even have bedbugs. This is just one of countless examples of this site being the primary positive factor in the lives of the infested. As user Freaked Fighter told me, “This site and this site alone is responsible for my ability to return to sanity.”

If you want to a join the community, though, you have to learn the rules. Here’s how to use the forums most effectively.

Check out the FAQs and “Do’s and Don’ts” pages.

The information on this site is based on solid science and research. It’s good to replace what you’ve already been told about bedbugs with everything on these pages, since that’s what the site’s experts will be using to assist you. You’ll get the facts on how to know if it’s bedbugs or something else, learn how to prepare for treatment, and see lots of pictures of bedbugs next to various coins.

Make sure it’s something that communicates how anguished or murderous you are. Some of my favorites: AbsolutelyFreaking, The Bitten One, prego and paranoid, ITortureBugs4Revenge, Bedbug_Undertaker, feelinghelplesswith3 babies (which I believe is the first line of a Reba McEntire song), and i can do this (if there’s anything bedbugs hate, it’s a winning attitude).

A picture is worth a thousand desperate words. If you don’t already have one, create a Yahoo account and post clear photos on Flickr, as this is their preferred method of reviewing evidence. Embed the pictures in a new post using the BBcode from Flickr. In my experience, they tend to skip over your epic account of the last few months of your life and just look at the pictures.

Post pictures of stains, bugs, and skins, not bites.

Cain says that an infestation can only be confirmed by fecal stains, shed skins, and/or whole bugs. Unlike other sources, this site says that you can’t tell if you have bed bugs just from bite pattern or appearance. If you don’t find any of those three things, the site tells you to install a passive monitor (created and sold, with full transparency, by Cain himself), but you can also have your landlord call a PCO with bed bug experience just in case. This is what I did, since there were no obvious signs besides my golf-ball-sized bites.

Here is a picture of my arm two days after being bitten. Please enjoy. 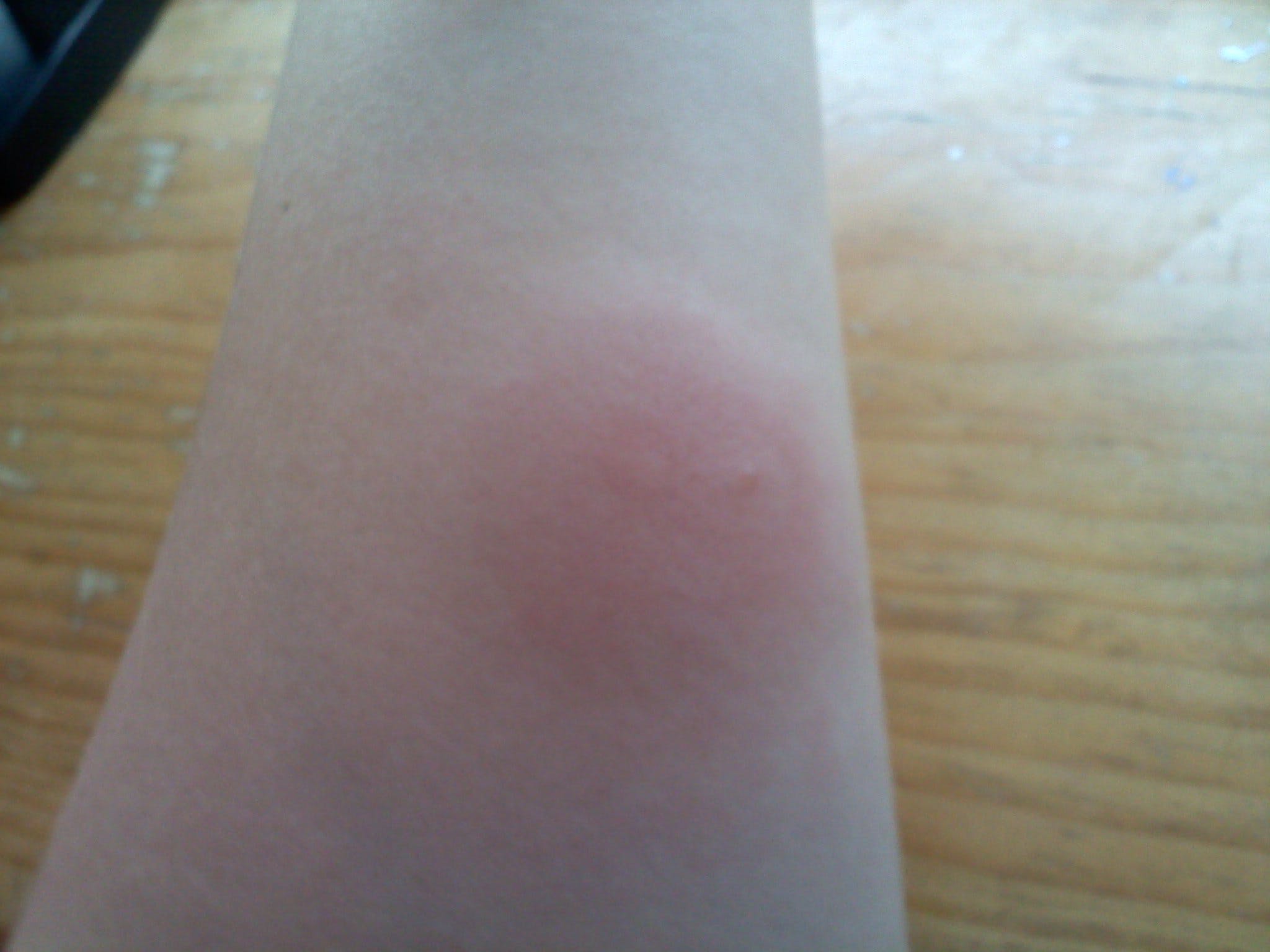 (I texted it to the guy I saw Lincoln with, which is the opposite of sexting.)

The essentials for any city dweller are bedbug encasements for your mattress, box spring, and pillows. There’s a product for every level of paranoia, so you can literally pick your poison.

Even now that I’m an amateur expert on bedbugs, I recently let a minor scare cause me to spray my whole room in a powder marked “not for use around pets.” Anytime I see even a tiny red mark on my skin, I consider taking a spoon and scooping it out so that it doesn’t exist anymore. That’s my anxiety’s idea of how to fix bedbugs. The lasting effects on your psyche can be significant, so reach out and ask for help. It’s also important to have a look at people’s success stories to remember that you will at some point be bug-free.

All work and no play makes bedbug experts create a tongue-in-cheek calendar of themselves. This steamy PDF features such Bedbugger celebs as David James, the creator of a bed bug murder device company PackTite. 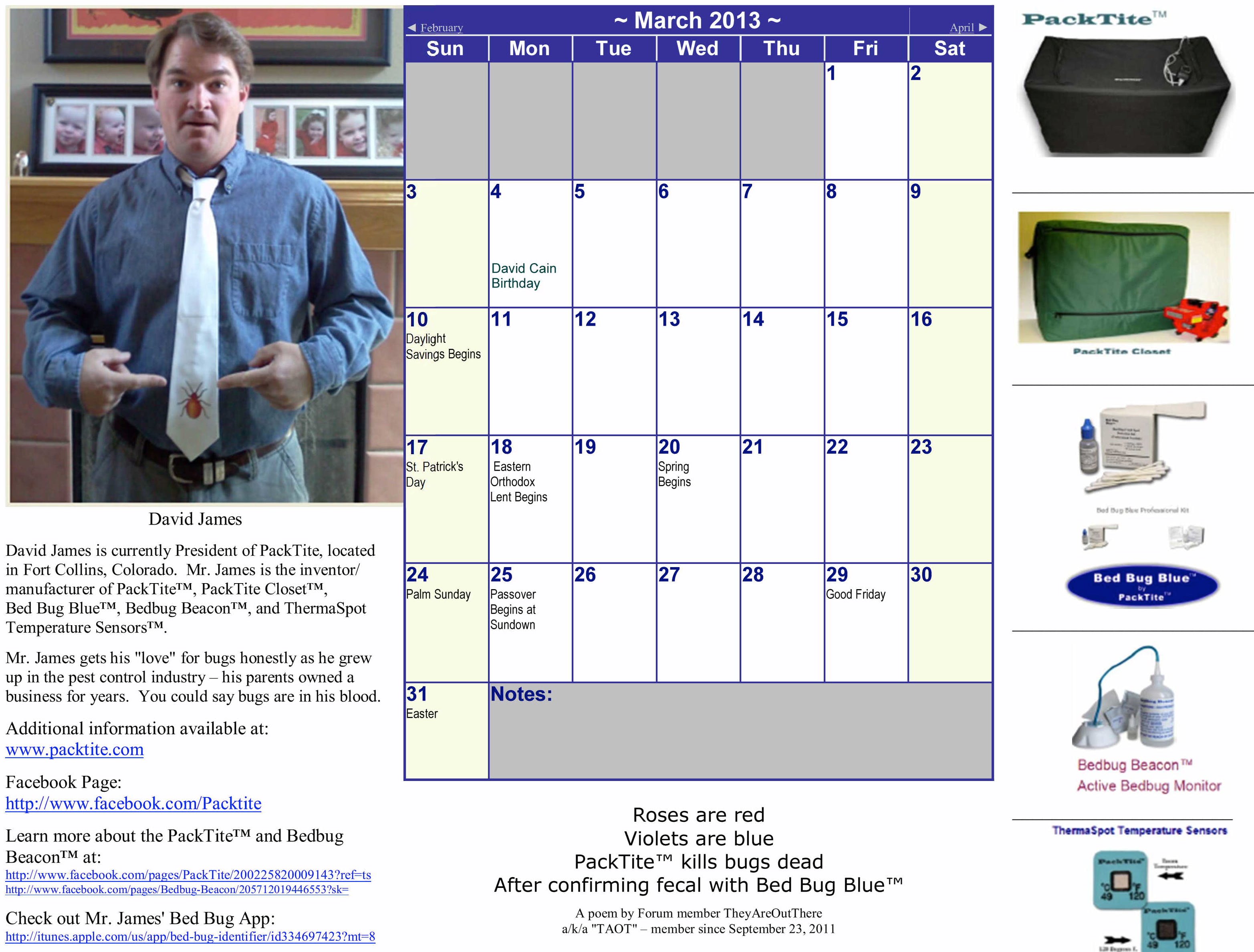 This guy is a huge deal. Anyone who’s had bedbugs more than once has at least considered buying one of his products. They’re essentially the Cadillac of insect crematoriums. I imagine he has an indoor pool and a hot wife. He even wrote this poem:

Who could resist? If you’re one of the many people whose sex life has been destroyed by bedbugs, let Mr. February stoke your fire. David Cain, you knowledgeable minx. 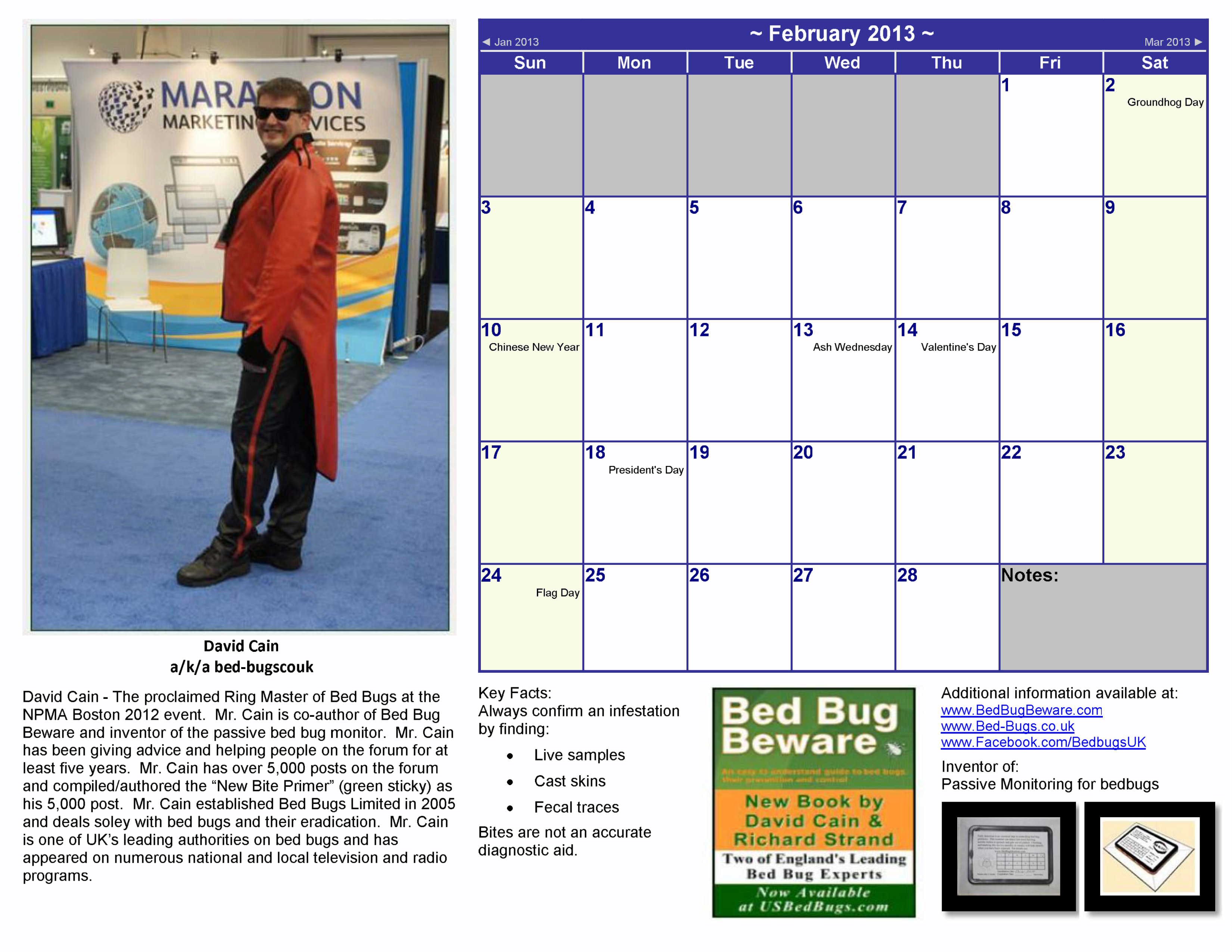 I’m currently bugless. The nightmare is over. But since I have sensitive skin, an active imagination, and a penchant for rolling around on discarded sidewalk mattresses, I’ll continue using the wonderful, singular, fascinating Bedbugger.com.

Also, if anyone has Lincoln on DVD, please get in touch.

Correction: A previous version of this article mistakenly referred to user Nobugsonme as male. She is female.