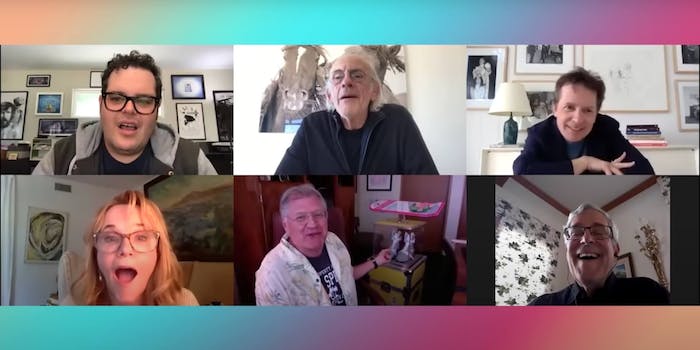 Like many of us, Josh Gad is keeping busy in lockdown. He’s read children’s books aloud on Twitter, voiced Olaf in a series of Frozen shorts, and now he’s helping to reunite the casts of your favorite movies virtually for charity.

In the second episode of his new YouTube series Reunited Apart, Gad got the stars of Back to the Future trilogy on a video call to chat about their experience working on the films. While the call is missing Tom Wilson (Biff Tannen) and Crispin Glover (who was only in the first film), Gad was able to get a lot of major players on the line.

With that many people on the line, it has the ability to get out of hand real quick. But it’s largely the kind of reunion panel you always wanted, albeit in Zoom form. Fox recreates some iconic scenes. Lloyd muses about Rick and Morty, a show whose DNA is steeped in Back to the Future. Thompson proposes a potential fourth Back to the Future film where they’d go back to early 2020 to warn people about the coronavirus. (There are currently no plans for a fourth Back to the Future movie.) There’s even a musical performance of “The Power of Love” to tie it all together—something that, after everything, feels very fitting.