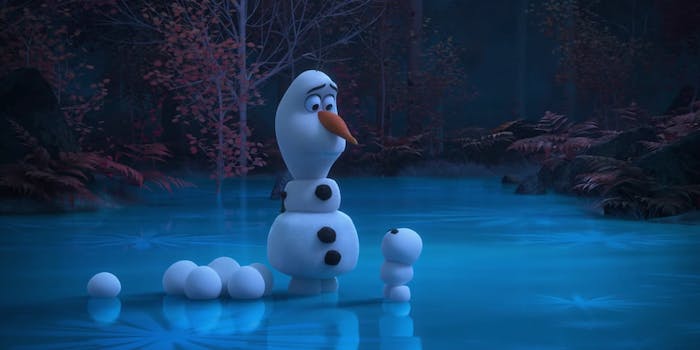 Disney is launching ‘Frozen’ shorts made from home and starring Olaf

We already got Frozen 2 on Disney+ three months earlier than planned so children and their parents had something new to watch while staying at home, but now Frozen fans are getting another delightful flurry of a treat.

Disney Animation released the first short from its new weekly digital series, At Home With Olaf, on Monday, which gives us a small glimpse at Olaf in a lighter moment. The first short, titled “Fun With Snow,” is only around 35 seconds long, but it has just about everything we know about the walking, talking snowman: Gad’s signature laugh, a low-stakes situation, and another cute creature.

The catch? Both Josh Gad, who reprised his role as Olaf, and animator Hyrum Osmond created the short from their respective homes.

As Gad revealed in a live Twitter broadcast, Disney’s head of animation Jennifer Lee called him last week and pitched him the idea of these Frozen shorts that could be worked on and made from home that would then be animated by Osmond, who led the animation on Olaf in the first Frozen film.

“They called me and they said that they were gonna do these little shorts, these animated shorts from home,” Gad explained. “Like, animate them from home, which is crazy, but I guess you can do that. And they asked me if I, in turn, would provide vocal assistance and voice Olaf. So I did. It was a little bit of a challenge because I’m not good technically, and now, we’re releasing Olaf shorts!”

Gad sees the shorts as a little something that might put a smile on people’s faces and bring them joy. And seeing how he’s already been spending part of his time in self-quarantine reading children’s books on live streams, he’s very much for spreading a little more joy on the internet.