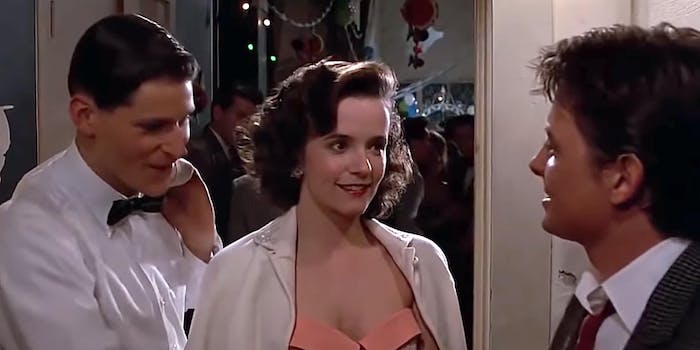 ‘Back to the Future’ screenwriter offers answer to longstanding ‘plot hole’

The answer to the question you may or may not have been wondering.

Back to the Future is essentially a perfect film, one that has lasted the test of time nearly 35 years after arriving in theaters. But a reemerged discussion on a minor detail resurfaced this week, leading the film’s screenwriter to offer his perspective.

It all started earlier this week as Guardians of the Galaxy director James Gunn participated in the #FivePerfectMovies hashtag, which is designed to both recommend great movies to your friends and followers and encourage five other people to do the same; it’s a quintessential chain letter hashtag for the Twitter age. And while Gunn eventually offered his list of five perfect movies (Back to the Future, Chinatown, Rashomon, Eternal Sunshine of the Spotless Mind, and The Thing), he had a small caveat regarding Back to the Future. A caveat that also included the possibility of “time protects itself from unraveling, etc.” as to why Marty McFly’s parents wouldn’t recognize him.

The scene that Gunn is referring to arrives toward the end of the film after Marty returns back to 1985: He wakes up in his own bed and discovers that his life has both changed drastically and stayed the same. His older brother Dave has an office job, his parents are in better shape and seem to still actually like each other, Biff Tannen is the one waxing George McFly’s car, and George wrote his first book.

But, despite how George and Lorraine McFly’s love story has changed thanks to Marty’s meddling, they don’t seem to recognize that the person who helped them get together 30 years ago looks just like their own son. (Not to mention that after Marty says goodbye to his parents, Lorraine notes that Marty is “such a nice name.”)

Chris Pratt had a different way of looking at it. It’s not so much a misstep on the film’s part, but one of those things that, thanks to the passage of time, can get mixed up. They might remember Marty, but as Calvin Klein, the name that Lorraine referred to Marty as for much of the movie because, as she noted when they first met, “it’s written all over your underwear.”

The discussion took over Twitter, although it’s questionable whether this is an actual plot hole or just a minute part of the movie that wasn’t exactly worth breaking up the flow to examine. (And to be fair, we’re all cooped up inside, so it’s not like many of us have much to do anyway.) But The Hollywood Reporter got ahold of Back to the Future screenwriter Bob Gale to ask about George and Lorraine not recognizing Marty. As it turns out, Pratt wasn’t too far off in that while they might remember the Marty who got them together, they might remember him as Calvin, noting that’s not that unusual to have hazy memories of someone you briefly went to school with several decades ago.

“Bear in mind that George and Lorraine only knew Marty/Calvin for eight days when they were 17, and they did not even see him every one of those eight days,” Gale said. “So, many years later, they still might remember that interesting kid who got them together on their first date.”

“So Lorraine and George might think it funny that they once actually met someone named Calvin Klein, and even if they thought their son at age 16 or 17 had some resemblance to him, it wouldn’t be a big deal,” he added. “I’d bet most of us could look thru our high school yearbooks and find photos of our teen-aged classmates that bear some resemblance to our children.”

But Marty’s impact on George is apparent. His first novel, A Match Made in Space, is practically a recreation of his “dream” in which Marty appears before George in a hazmat suit to tell him that if he doesn’t ask Lorraine to the Enchantment Under the Sea Dance, he’ll melt his brain. (The names of Vader and Vulcan have been changed.) So while they might not recall Marty by name or notice that their youngest son is a dead ringer for the guy who got them together, they remember him in ways that count.

Fortunately for us, Back to the Future is arriving on Netflix May 1, so we’ll have ample opportunity to not only debate this ad nauseam, but also to sit down and watch (or rewatch) a truly great film.