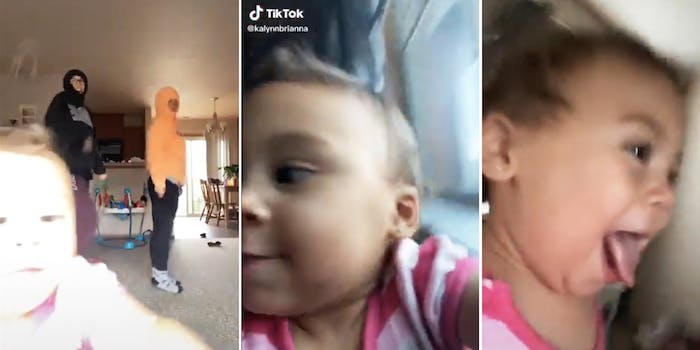 A lot can go wrong when you’re trying to film the perfect TikTok challenge or dance routine. There’s always the possibility of sudden injury, or even that an errant Karen may come stumbling along to inadvertently out herself as a racist. Or, in a much more wholesome example, a giggling baby might straight-up steal your smartphone.

The moment came to us from TikTok user @kalynnbrianna, who writes in her bio, “Basically all videos are with my daughter, she’s the star of the show.” She’s not wrong! In the video, Brianna and her friend were attempting a popular dance challenge to a Loren Gray track when her baby girl had other ideas.

Within moments after the camera begins filming, the baby comes along and grabs the phone and makes off with it, with her mother in hot pursuit. Eventually, she catches her daughter—but not before a glorious chase scene which is joyously told through the baby’s POV for about 10 seconds.

The video has got a real “kid finds a knife” energy to it, so it’s not difficult to see why it’s become so popular. After amassing 800,000 views on TikTok in just two days, the clip made its way to Twitter where it continued to go viral—gaining nearly 6 million views within 24 hours.

Others continued to share the video, making clever commentary. “Nobody runs faster than a baby who has something they not supposed to,” quipped one user, not inaccurately!

Others had observations about the way her tongue cheekily stuck out during her baby shenanigans, and so on.

Yes, we’d have to agree to that last salient point. More baby phone thieves, please, and less of [waves arms] everything else.