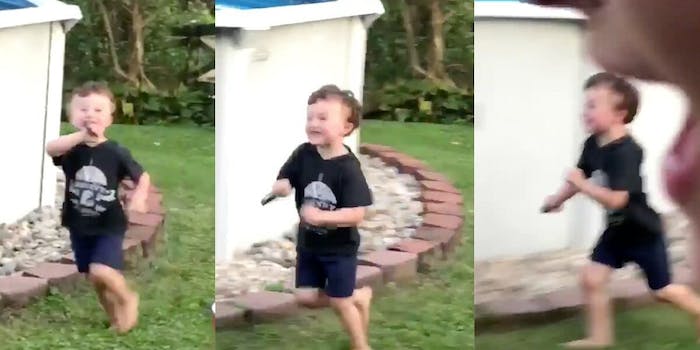 Vine, the six-second video app that redefined comedy for the social media age, is dead. But the spirit of Vine—ridiculous, short clips that get funnier every time you loop them—is alive and well in the form of this toddler(?) running with a knife.

Madison Meyers, who took the video and posted it to Twitter, claimed it made her laugh for 15 minutes straight. To watch it is to believe her.

Where did the knife come from? How did he get it? It doesn’t matter. He’s just so gleeful! And the little details are perfect: the beer-pong table in the foreground, the gleeful shout of “a knife!,” one woman shouting “NO!” and setting down her cup to chase after him, the man seemingly shrugging on the left side of the frame, and the cut-off musing of one of the other women: “Oh my god, why does he have a …?” The way Meyers zooms in on the little knife-wielder is also sublime.

That’s a lot to pack into four seconds, even shorter than Vine’s limit of 6 seconds. But, because you’re going to loop it over and over, it’s effectively 15 minutes long. And that’s what makes it so perfect.

By the way, the woman screaming “No!” is not the mother of the boy. And, yes, she did eventually catch him. She also posted a couple of great reactions on Twitter.

That doesn’t explain where the parents were, but hey, some things are better left to our imaginations.