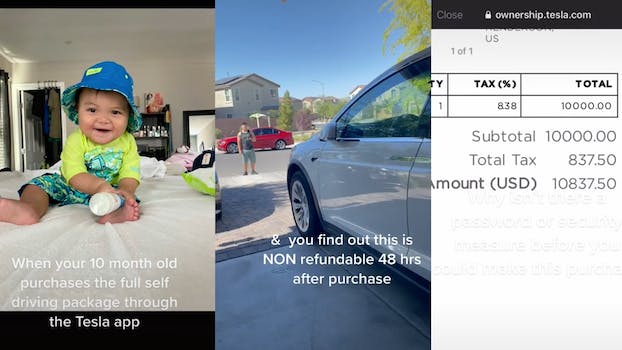 The creator claimed she didn’t know about the purchase until checking her bank statements.

TikTok user @user8124675217369 posted a video saying her 10-month-old baby upgraded her Tesla to the full self-driving package through the Tesla app.

The TikTok has amassed over 1 million views and almost 200,000 likes.

The creator claimed she didn’t know about the purchase until checking her bank statements, but it was too late to cancel since the purchase becomes nonrefundable after 48 hours.

The creator didn’t seem upset that her baby allegedly blew over ten grand, but viewers couldn’t believe it.

One user commented, “Lmao this is CAP,” to which the creator responded it’s not. Although, some users teased the ones who believed it was real, implying that the video was obviously a joke.

“people r so dense,” one person wrote, and the TikToker liked their comment.

The common question was how the baby was able to make such a purchase.

“Why you let a 10 month old on a IPad lmao probably wouldn’t have happened if u hung out with him,” one viewer commented.

Others appreciated the sheer flex of not noticing such an expensive purchase.

“My guy just flexing that he spent 10k and ‘didn’t even notice,’” one user said.

Another commented, “But imagine having 10k in bank and not noticing that lol.”

The creator did not respond to the Daily Dot’s request for comment by the time of publication.