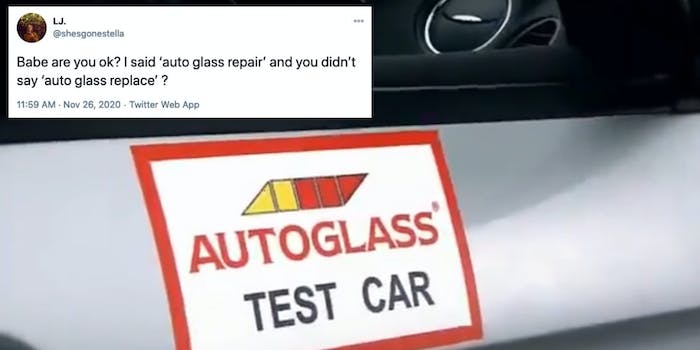 This ‘Babe are you OK?’ meme jokes about couples who are overly in-sync

Get in the 'Zone?

Have you ever known one of those couples who somehow manage to finish each other’s sentences? Heck, maybe you even are part of one of those couples—you insufferably adorable monsters, you. A new call-and-response meme making its way around Twitter takes things a step further by asking a theoretical partner, “Babe are you OK?” in the event they don’t complete a catchphrase or a song lyric.

The meme seems to have originated on November 26, when London-based Twitter user @shesgonestella tweeted a reference to an old British windshield repair commercial jingle. “Babe are you OK?” she wrote. “I said ‘auto glass repair’ and you didn’t say ‘auto glass replace?'” (If the jingle sounds familiar, Autoglass in the UK is owned by the same parent company as Safelite in the states.)

As her tweet went viral—being “liked” over 65,000 times and retweeted over 6,000 in a matter of days—others began adding their own takes on the “Babe are you OK?” meme. These ranged from EA Sports and AutoZone commercials to songs by DJ Khaled, Paul McCartney, and so on.

And of course, who can forget everyone’s favorite Sopranos catchphrase? If your bae can’t even muster up a simple “bada boom,” it’s totally warranted to ask, “Babe, are you OK?”

Likewise, if your partner can’t be bothered to react to the uber-catchy theme song from New Girl.

Hey, if nothing else, the “Babe, are you OK?” meme makes for a pretty good litmus test to see if your relationship needs a tuneup. Otherwise, you just may be headed for rocky waters.

This viral tweet has people debating the merits of bodegas