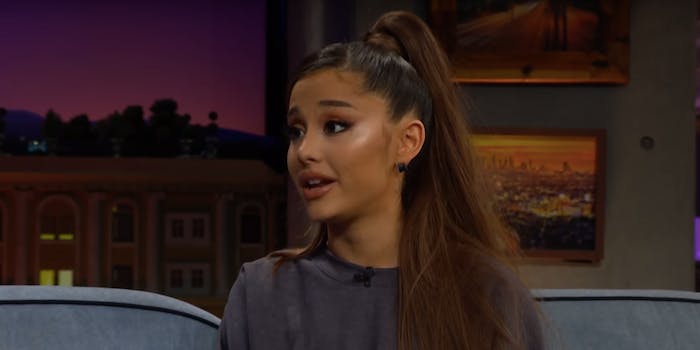 The coronavirus outbreak and ensuing quarantine orders have put a strain on musicians who would rather spend their time in the studio or on tour. Ariana Grande is spending that mandatory time at home as productively as anybody could hope: by sharing impressive homages to The Waterboy on Instagram.

The “Thank U, Next” singer paid tribute to Adam Sandler’s 1998 sports comedy on Sunday. She posted a photo of Sandler’s character, Bobby Boucher, and a video in which she lip-syncs a conversation between Boucher and two groupies. Grande dons an appropriately ludicrous suit and nails Sandler’s nervous smile as she recreates the scene with help from two of her former acting co-stars: Victorious’ Liz Gillies and 13: The Musical’s Aaron Simon Gross.

This is not Grande’s first time paying homage to iconic comedies. Her “Thank U, Next” video contains nods to 2000s teen movies Mean Girls, Bring It On, Legally Blonde, and 13 Going on 30. Nor is it her first time publicly acknowledging her Sandler fandom. In 2011, she expressed her affection and compassion for Sandler’s Boucher on Twitter, writing, “am i the only person who cries when watching Water Boy? Adam Sandler just makes me cry i feel so badly for him in this movie , i <3 him!”

Grande can rejoice knowing her fandom did not go unnoticed. Sandler himself commented on the singer’s Instagram post, writing, “Bobby Boucher approves of this message.”

Perhaps Grande can recreate a scene from Uncut Gems for her next Instagram video, or cut a verse for Sandler’s new quarantine song.