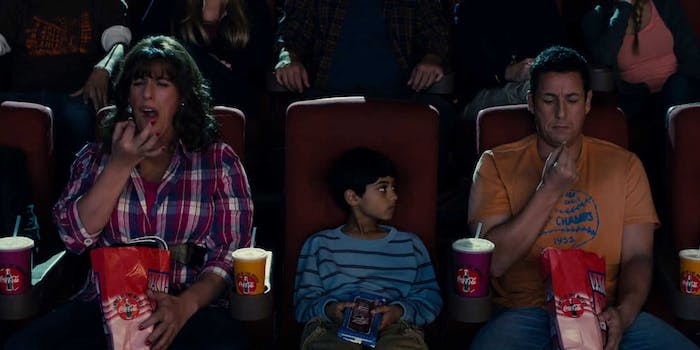 If Adam Sandler is such a hot commodity, why does this move oddly feel like a downgrade?

Adam Sandler is one of the biggest stars in the world, but the comedian’s career suddenly looks a little smaller.

Sandler recently signed a four-picture deal with Netflix, the digital streaming giant whose recent venture into TV production with shows like Orange Is the New Black and House of Cards made the company the Internet’s own heir to HBO. However, Netflix currently has its eyes on making a dent in Hollywood and cited Sandler’s “international appeal” as part of the motive for signing him. According to Netflix, Sandler is “among the few actors in the world whose films consistently rank among the most viewed by Netflix members.”

But if Adam Sandler really is such a hot commodity, why does this move oddly feel like a downgrade?

Netflix doesn’t release its streaming numbers, making it impossible to cite figures, but it’s likely the company isn’t speaking of Sandler’s recent output in its barometer of success. This spring’s Blended reunited Adam Sandler with his Wedding Singer co-star Drew Barrymore. Released in 1998, The Wedding Singer proved Sandler’s first breakout success, raking in $80 million in box office sales (which comes out to $139 million when adjusted for inflation), but Blended grossed about half that, taking in $46 million. Outside of animation and the Grown Ups franchise, Sandler hasn’t had a qualified success since 2011’s Just Go With It, a forgettable Jennifer Aniston vehicle.

Since Just Go With It, Sandler’s most successful non-Grown Ups live-action film was Jack and Jill, a critical bomb that marked just how far south Adam Sandler’s career has gone. Sandler has never been well-liked by critics (of his comedies, only The Wedding Singer ever netted a “Fresh” rating on Rotten Tomatoes), but Jack and Jill was akin to critical smallpox, the kind of plague you evacuate cities to stay away from. On top of netting a 1 percent score on Rotten Tomatoes, the film had the dubious honor of winning Sandler his first-ever Razzie for Worst Picture; this is something of a feat when you consider that recent years have also brought us I Now Pronounce You Chuck and Larry, Click, and Mr. Deeds.

Jack and Jill is a curious case, not just because it’s a movie that’s poorly made but because it’s a movie that seems to be intentionally so, often pointing out its own flaws. Films like Grown Ups 2 are so lacking in plot that you can tell no one involved with the movie cared to think up one, but Jack and Jill is overtly intent on punishing viewers. In the film, Sandler plays both Jack Sadelstein and his overbearing twin sister, Jill, a Jewish caricature that appears birthed from an SNL skit filmed in Hell. The pushy, loudmouthed Jill spends the entire movie steamrolling everyone around her, while grating on her brother’s last nerve. But moreso her behavior appears directed at the audience, as if to say: “This is what you wanted?”

If that sounds like a bunch of editorializing, Jack and Jill makes its intentions oddly clear. In the film, the actor plays a prototypical latter-day Sandler hero: a bored, wealthy husband who hates his wife and kids. The type first metastasized in Click, in which Sandler is trapped in a terrible marriage with casual glamazon Kate Beckinsale (may we all be so tortured), but the character has reared his ugly head since in Grown Ups and Blended, and here. In Jack and Jill, he spends his sad days having sex with Katie Holmes while hanging out with Shaquille O’Neal, John McEnroe, and Al Pacino, whom he’s working on a Dunkin Donuts commercial with.

The latter detail sums up the entire movie, one forged by ill-fitting celebrity cameos and product placement, which likely paid for the film. Sandler has admitted that he views his films as paid family vacations, a fact that explains why much of Jack and Jill’s runtime takes place on a cruise ship, while Jill is being wooed by Pacino. However, a reluctant romance between Serpico and Adam Sandler in a dress is far from the film’s most bizarre quality. At the end of the film, Sandler’s ad executive shows Pacino the finished commercial (which, of course, features him rapping), and Al Pacino instructs him to burn it. He says, “All copies must be destroyed. No good.” These are the final words of the film, Sandler’s own referendum on his work.

This fourth-wall breaking, however, isn’t the first time Sandler has lashed out at his own creative work. In 2009’s Funny People, Sandler played George Simmons, a famous comedian (similar to the actor playing him) who loathes what has become of his career, particularly the choices he’s had to make to stay successful. For instance, Simmons once appeared in Re-Do, a Tropic Thunder-esque fake film that casts him as an actual man-baby (and not just in the Seth Rogen sense). Although that sounds more like a Jim Carrey high-concept comedy, it’s a clear dig at Sandler’s own less-than-stellar track record. Anybody remember You Don’t Mess With the Zohan?

The problem with Funny People is that, like many of Adam Sandler’s efforts at introspection, it didn’t pan out so well. Funny People earned middling, if somewhat divisive reviews, as director Judd Apatow began his foray into overlong cinematic indulgence. Sandler has a bad habit of wasting his dramatic efforts on the rare misfires of well-regarded everyman auteurs, including James L. Brooks’ Spanglish, which was as tonally deaf as Broadcast News was pitch-perfect, or the one-two punch of Jason Reitman’s Men, Women, and Children and Tom McCarthy’s The Cobbler, both of which bombed at the Toronto International Film Festival. Early word suggests that The Cobbler is so bad it has to be seen to be believed, if you’re willing to put yourself through the torment.

Sandler’s shining moment as a thespian came in 2002’s Punch-Drunk Love, a surreal romantic comedy in which Sandler played an mild-mannered regular guy on the verge of a nervous breakdown. Sound familiar? That’s because Barry Egan, his character in that film, wasn’t all that different from anyone else he’s ever played. Sandler just finally found that right vehicle for his persona, as well as a director willing to deconstruct his actor’s tics. Punch-Drunk Love is like Happy Gilmore without the invitation to laugh, showing you the anger, bitterness, and regret underneath the comic facade.

But as Sandler found out, once you invite the audience to see how the sausage is made, there’s no going back, and he’s never quite been the same actor since. This could also be a result of the actor’s apparent frustration over not getting Academy Award recognition for the role, despite wide critical plaudits for his portrayal. Like Eminem’s acclaimed performance in 8 Mile, the Oscars don’t like to recognize a certain type of star making good on their dramatic promise, or Cameron Diaz would have followed up her SAG and Golden Globes nominations for Vanilla Sky with an Oscar nod. After all, look at what happened when they took a shot on Eddie Murphy with Dreamgirls: The Academy got rewarded with Norbit.

It wasn’t just that the Academy didn’t welcome Sandler with open arms. None of the actor’s forays into more nuanced territory have excited audiences in the same way that his perfunctory comedic films have, even at their absolute laziest. Grown Ups made $162 million, almost 10 times the box office take of Reign Over Me or Punch-Drunk Love, both modest earners, even by indie standards. If neither critics nor the public are coming, what’s the point of continuing to build it? With recent downturn in the past few years, Sandler has attempted to go back to dramatic work, having no more success. For someone thought of as one of the most bankable stars in the world, Sandler can’t win for losing.

Although the Netflix deal might seem like a business-savvy move at first glance, the biggest issue is that it further signals Sandler’s retreat into his own comedic hole, a sign that he’s given up the fight for quality. Sandler is producing each of the four proposed Netflix films through his own production company, Happy Madison, the same folks who brought us Zookeeper, Jack and Jill, and the vast majority of Sandler’s worst projects. When given creative control, he’s a product of his worst tendencies, a propensity to feed viewers the same half-baked crap, knowing that they probably won’t go for anything else. But as recent history shows, audiences may finally be full.

Photo via Jack and Jill/Trailer