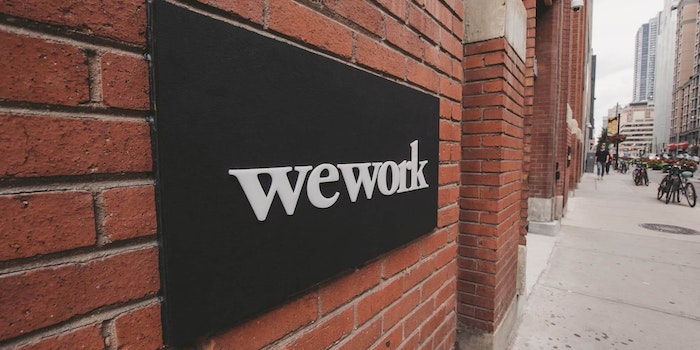 WeWork’s IPO is dead, but at least we had a good laugh

It's nothing short of poetic that the main factor that derailed WeWork's IPO is the S-1 document it filed to go public.

Earlier today, WeWork announced it was postponing its long-awaited IPO. The about-face is hugely embarrassing for the tech/real-estate company, which has long been regarded as an ascendant star in the startup world.

WeWork is the preferred landlord of startups and creatives. Unlike established players, like Regis, WeWork is defiantly modern. It sells itself with trendy furnishings, free beer, and vague notions of “community.” And, above anything else, they’re ubiquitous, with 836 locations across the globe.

Funding that expansion (and free beer) is a steady trickle of venture capital money. The main backer of WeWork is SoftBank’s Vision Fund, which owns a 29% stake in the company. In total, SoftBank’s has invested $10.65 billion in WeWork, often at zany valuations. After one funding round, the firm was valued at $47 billion — a figure that many regarded as highly inflated.

For context, that’s greater than the entire market capitalization of the Ford Motor Company. Other valuations had it priced much higher.

Though many have had aspersions about WeWork’s business model, no one could have predicted how precipitous its star has waned. And it’s nothing short of poetic that the main factor that derailed WeWork’s IPO is the S-1 document it filed to go public.

A bit of explanation: When a company wants to sell its shares on a public exchange (rather than privately to investors), it needs to have what’s called an “initial public offering.” To do this, the company has to publish a document that details, in excruciating detail, the financial and business risks facing the company. This prospectus ensures potential investors are informed before parting with their money.

And WeWork’s S-1 was full of juicy gossip.

For starters, it showed the company was hemorrhaging money and was nowhere close to reaching profitability — or breaking even, for that matter. In the first half of 2019, WeWork lost $689.7 million on revenues of $1.545 billion.

It’s conceivable that the majority of WeWork’s losses were due to its ambitious growth strategy, which saw it continuously battle to open more offices in more cities. Leasing (and sometimes buying) new buildings and then refurbishing them to a high standard is a hugely expensive business.

But a massive part of the problem was Neumann. The S-1 revealed that Neumann owned the “We” trademark and charged the company nearly $6 million for the trademark rights. After a public backlash, Neumann refunded WeWork.

And then there’s the matter of the private plane. Last year, while neck-deep in red ink, WeWork spent $60 million on a brand-new Gulfstream G650 corporate jet for the use of Neumann. This came with all the trimmings, including a fancy entertainment system, as well as two bedrooms.

The incidents proved WeWork was rife with corporate governance issues, and this ultimately resulted in a loss of faith in its leadership.

But perhaps the most significant reason WeWork’s IPO failed was that the market called it out. WeWork’s valuation was inflated. WeWork’s leadership team and investors were drunk on a noxious cocktail of hubris, optimism, and the belief that they were changing the world. So Wall Street passed.

Investors were unwilling to part with their money at WeWork’s insane valuation, even after it had been cut several times. That, combined with the company’s internal management woes, meant it was unable to continue with the IPO.

WeWork isn’t going away. Sure, it’s mired in debt, but it’s also a hot brand, even with the most recent knock to its esteem.

If it can make the fundamentals of its business work, there’s no reason why WeWork can’t emerge as a sustainable company and re-file to go public. But if that happens, it’ll look like a radically different company, with a more conservative culture, and a more modest footprint.

Oh, and Neumann won’t be at the helm. He’s been replaced.