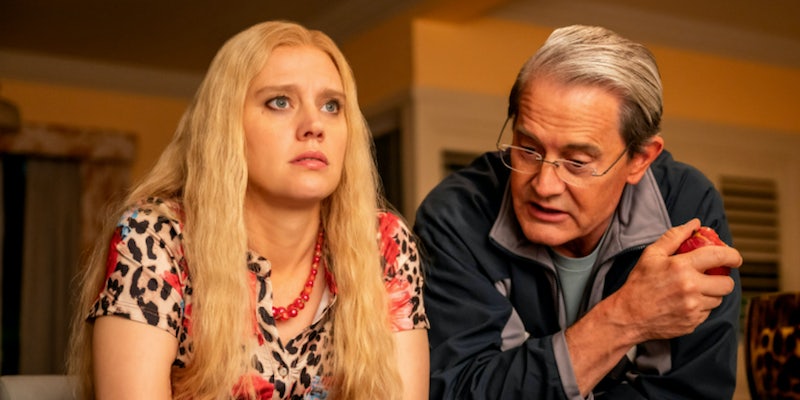 Why does ‘Joe vs. Carole’ exist?

There are likely more Tiger King-related projects on the way, but Joe vs. Carole should be the last and then we should all just move on.

Drawing from Robert Moor’s 2019 Wondery podcast series (and not Netflix’s Tiger King series), Joe vs. Carole is Peacock’s dramatized retelling of the rivalry between Carole Baskin (Kate McKinnon) and Joe Exotic (John Cameron Mitchell). Tiger King had the fortune of debuting in March 2020, and locked-in viewers devoured the tale of rival big cat owners and a murder-for-hire plot gone south, even as we questioned why we found this ultimately tragic story entertaining.

RELEASE DATE: March 3, 2022
CREATOR: Etan Frankel
STREAMING: Peacock
Kate McKinnon and John Cameron Mitchell give it their best in a series that offers too little, too late.

But two very long years have passed. A Tiger King meme, in March 2022?

At the center of the eight-episode series are solid performances from its leads. Mitchell is excellent as Joe, blowing up his larger-than-life persona and wicked ambition. McKinnon almost gets there with Carole, the activist and cat lover, but struggles with making her a little too, well, grounded. The series gives more shape to her past as an abuse survivor, instead of focusing on the accusations of murder trailing her, as the documentary did. (Kyle MacLachlan is peak Kyle MacLachlan as devoted husband Howard Baskin, even if he seems to be playing an older version of his Portlandia mayor.)

The back and forth between Joe and Carole’s stories starts to become repetitive, though. There’s some other inspired casting to keep you engaged—c as fuckboy zoo partner Jeff Lowe—but Joe vs. Carole certainly stretches the limits of the “limited series.” You really just want to see Joe and Carole square off, but that moment never comes.

Joe vs. Carole sits with other series in the Dramatization of Very Recent Events genre, like The Dropout and Inventing Anna, but worse, it doesn’t add anything new to a story that’s already been told. (And one of its subjects is in prison.) Is this series for the people who didn’t watch Tiger King or listen to the podcast?