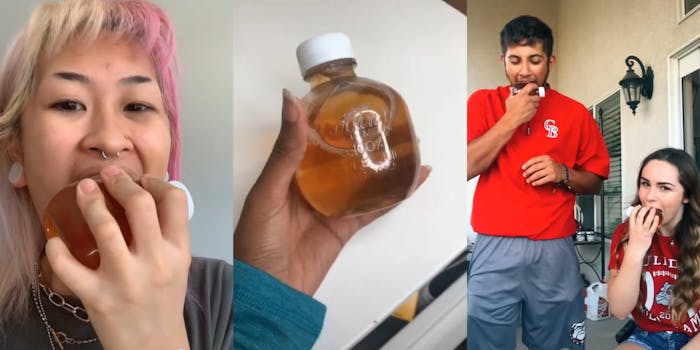 This is certainly a win for Martinelli's.

TikTok has become a test kitchen for dodgy food and drink experiments, but we’re not exactly sure where biting into a bottle of Martinelli apple juice falls on the spectrum.

A TikTok trend shows people biting into the (plastic) Martinelli bottles because doing so allegedly makes the sound of crunching into an apple.

Others went deeper into the bottle. One user cut it open to reveal three layers, which could be the source of the sound.

The #martinelli hashtag has more than 28 million views on TikTok. Is this a covert ploy to get sales up? On Thursday, the Martinelli’s Twitter account addressed the trend, stating: “While we don’t condone biting into plastic, we are happy to see everyone enjoying our products. Have you tried the juice inside? It’s even better than the bottle.”

Elsewhere, a Martinelli’s representative said the bottles were not “intentionally” designed to make the sound.

There are, of course, critics who claim people are using a sound effect, or that it sounds just like biting into a water bottle.

And there are OG Martinelli’s heads who already knew about this, OK?

A YouTube clip from 2012 yielded a similar sound, which proves this isn’t new. All the recent comments are people “here from TikTok.”