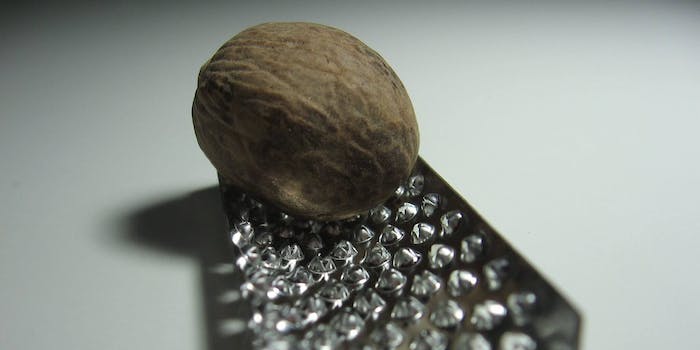 Maybe don't try this at home?

Every 5-10 years young people seem to rediscover that they can get messed up at home, not by raiding their parent’s liquor cabinet or finding their weed stash, but by going through the spice rack. Common nutmeg, a spice that tends to go unnoticed until winter holidays roll around, is being used once again by bored teenagers stuck at home. This time it’s gaining moment thanks to the #NutmegChallenge currently making the rounds on TikTok.

TikTok users are posting videos of themselves drinking large quantities of the spice mixed with water and recording the results. They claim the concoction produces a hallucinogenic high similar to LSD or psychedelic mushroom.

TikTok officially describes the challenge as a soccer move. In sports terminology a “nutmeg” means you managed to dribble the ball between your opponents legs.

Searching #NutmegChallenge on TikTok brings up the following description:

“Get it right and there is no greater feeling in the world. It’s time to celebrate the most classic move in all of football… The Nutmeg ⚽️ Show us your best attempt using #NutmegChallenge and get creative with your entries. Remember, If the ball doesn’t go between the players legs, it doesn’t count!”

But for every sports video posted, there are five or so videos showing someone consuming nutmeg to get high.

Nutmeg has been used as a spice for somewhere around 3,500 years. Until the 19th century, it’s only known source was the Banda Islands, a small group of volcanic islands in Indonesia, which are sometimes referred to as “The Spice Islands”. In a tale all-too-familiar to students of history, Europeans first traded with the natives for the spice but eventually slaughtered and enslaved them. The Dutch all but wiped out the native population while the British stole many of the trees, transplanting them to other parts of their empire. Today, far-flung Guatemala produces more nutmeg than any other place in the world.

Although nutmeg has no official medicinal use, it has been used for centuries in folk medicine, especially as a way to produce abortions. The general consensus among health workers is that it’s fine for pregnant women in small doses but that they should avoid consuming large quantities (which is probably good advice for everyone).

Its history as a recreational drug is less well documented, but it’s certainly nothing new. Macy Gray had a song called “My Nutmeg Phantasy” on her 2001 release The Id, and Ska/Punk band Fishbone recorded a song simply called “Nutmeg” on their 1997 album Chim Chim’s Badass Revenge. Both songs talk about the spice’s mind-altering properties. There’s also an FDA report from way back in 1967 that talks about Nutmeg’s use as a “psychoactive drug”. According to the authors, “Reactions to nutmeg vary from no mental changes at all to full-blown hallucinogenic experiences like those caused by hashish or LSD.”

A description of nutmeg archived by the Wiley Library notes a probable case of “nutmeg induced intoxication” from 1576. According to the report, an English woman ingested “10-12 nutmeg nuts” likely in order to induce abortion.

So can nutmeg make you trip?

The short answer is, yes. Much like THC, the active compound in marijuana, nutmeg and mace (a similar spice made from the shell of the nutmeg seed and unrelated to the self-defense spray of the same name) contain myristicin and elemicin, two compounds known to cause psychoactive effects. The relatively small amounts of the compounds contained in nutmeg is the reason you see people sometimes ingesting a cup or more of it in some of the TikTok videos.

How dangerous is nutmeg?

Dangerous enough. It can cause severe allergic reactions in certain individuals, but beyond that, ingesting large quantities can lead to serious symptoms and rarely even death, when mixed with other drugs. The effects also often take hours to kick in, leading people to take a second dosage under the mistaken belief that the drug is not working.

According to a 2018 report by Healthline:

“…myristicin is an incredibly potent and dangerous compound when taken in large amounts. In addition to the short-term effects of nutmeg intoxication, there are much more dangerous risks of consuming too much of this spice. In some cases, toxic doses of myristicin have caused organ failure. In other cases, nutmeg overdose has been linked to death when used in combination with other drugs.”

Although the current wave of nutmeg use involves mixing the spice in water, in the past some users have tried snorting nutmeg, which can lead to serious respiratory problems.

While drinking nutmeg is unlikely to kill you, if it’s not mixed with other drugs, it is still dangerous, and potentially lethal. Side effects can include nausea, palpitations, headaches, and dehydration. The effects can also last for 10 hours or more, a frightening prospect if things go badly. In the end, there are probably more pleasant, and far safer, ways to amuse yourself.