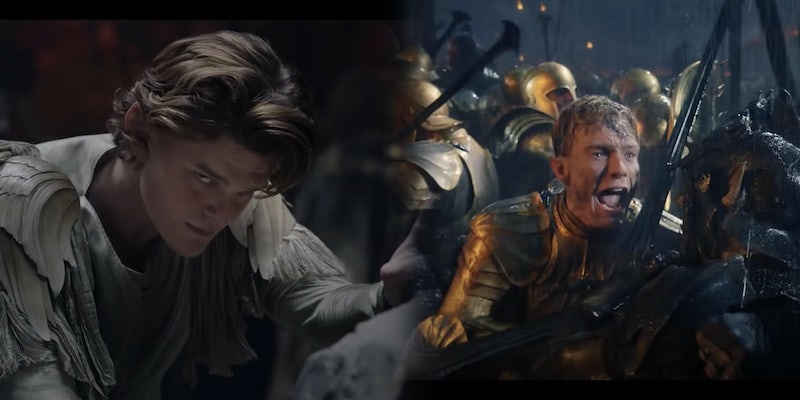 Why do male elves have short hair in Amazon’s ‘Lord of the Rings’ show?

In 'The Rings of Power,' some elves like Elrond have short hair, sparking controversy among LOTR fans. But do elves actually have long hair in Tolkien canon?

The first trailer for Amazon‘s The Rings of Power attracted a predictably intense level of scrutiny. Tolkien scholars are analyzing its use of Middle-Earth lore. Racists are complaining about the show’s diverse casting choices. Cinephiles are judging its bountiful quantities of CGI. But among all these micro-controversies, one particular detail caught my eye: Why do the male elves suddenly have short hair?

In Peter Jackson’s Lord of the Rings movies— in most Tolkien-influenced fantasy media—elves are portrayed as tall, slim, androgynous figures with pointy ears and long hair. It’s a very familiar visual trope. But in The Rings of Power, there’s a new gender divide among the elvish haircuts. For instance, while Galadriel has luxurious waist-length hair, Elrond has a kind of 1980s bouffant thing going on:

This disparity inspired criticism from a couple of angles. Some LOTR fans characterized it as an unwanted departure from Tolkien canon. Others saw it as a troublesome statement about gender roles in Middle-Earth, catering to real-world images of masculinity. It’s one of those seemingly-minor details that sparks very strong opinions among certain fans.

So, what’s the subtext of these new elvish haircuts, and does it actually matter?

Do elves actually have long hair in Tolkien canon?

According to the Daily Dot’s resident Tolkien expert, Anna María, Middle-Earth canon is surprisingly nonspecific when it comes to elvish hair length.

Tolkien often describes hair color, like Elrond’s hair being “dark as the shadows of twilight.” But while some male elves do have canonically long hair (Celeborn’s is “silver long and bright”), this isn’t established as a key element of elvish culture. Even in his unpublished manuscripts of Middle-Earth lore, Tolkien is much more concerned with describing the beauty and otherworldliness of the elves, and specifying the genetic differences between certain elvish lineages. For example, Legolas, as a Sindar elf, is almost certainly a brunet.

In other words, long-haired elves are more of a general fantasy trope than an official part of Tolkien canon.

The long-haired elf trope is a great example of how Tolkien’s work gets interpreted over time. Elvish hair trends are only vaguely described in the original text, but LOTR fans collectively developed a very specific image of what elves look like, creating a feedback loop with other fantasy media like Dungeons and Dragons. And for many people, Peter Jackson’s LOTR movies cemented the “official” aesthetic of Middle-Earth. This includes male elves with long hair, hence the backlash against the Rings of Power haircuts.

There’s a simple, in-universe explanation for why someone like Elrond might have short hair in The Rings of Power. This show takes place thousands of years before LOTR, and fashion trends change over time. Maybe in the Second Age of Middle-Earth, elves just had different haircuts. But that’s where the real-world questions come in. Why did the show’s creators make this aesthetic choice, and what does it mean for elvish gender roles?

On Twitter and Reddit, you’ll find hordes of fans disagreeing about whether short-haired elves are acceptable, often overlapping with criticisms about beardless female dwarves. According to Tolkien, all dwarves have beards. This became a recurring trope in other fantasy literature like Terry Pratchett’s Discworld novels. But The Rings of Power depicts dwarvish women without beards.

Both of these Rings of Power hair choices tie into modern, Western ideas about gender presentation. Tolkien often described his elves in rather feminine-coded terms: gracefulness, cleanliness, beauty. In turn, these descriptions probably influenced the prevailing image of elves as an androgynous race with long hair. If a historical fantasy character is meant to be ethereally beautiful, we just don’t expect them to have a crew cut.

In the Rings of Power teaser, we see male elves with a variety of different hair lengths. High King Gil-Galad (Benjamin Walker) has long hair, as do many of the background elves. But the other prominent elvish men have short hair: Elrond (Robert Aramayo), Arondir (Ismael Cruz Córdova), and Galadriel’s brother Finrod (Will Fletcher). Arondir and Finrod are both introduced in violent action scenes, while Gil-Galad is sort of gazing wisely into the sky.

With the obvious caveat that this is a 60-second teaser, there’s a correlation here between warriors and modern, masculine haircuts, corresponding with Hollywood’s conservative aesthetic for male action stars. Meanwhile, all the women have long hair, conforming to contemporary beauty standards. Galadriel (Morfydd Clark) is now an action hero, wearing plate armor during a battle scene. Given that she has long hair (sensibly braided or covered up for action sequences), it’s hard to argue that Elrond or Arondir’s hair is a purely practical choice. We’ll have to wait and see whether any women have short haircuts in the actual show.

Drawing from material in LOTR’s appendices, The Rings of Power aims to give Tolkien fans an authentic new spinoff while course-correcting the original canon’s blind spots. Echoing recent fantasy shows like The Witcher and Wheel of Time, it gives more prominent roles to women and people of color. In the grand scheme of things, haircut choices are a minor detail. But it will be interesting to see how the show’s creators choose to explain the “boy elves have short hair” situation, if at all.