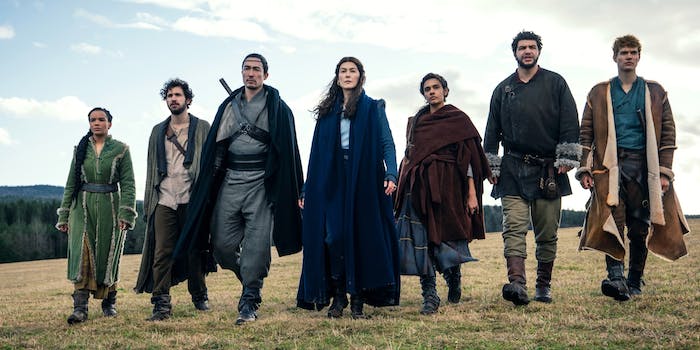 Review: Bezos wanted his ‘Game of Thrones’; Amazon Prime’s new fantasy epic ‘The Wheel of Time’ is a worthy challenger

Arriving in a crowded landscape when the “unwieldy high fantasy epic” descriptor has long stopped being a deterrent for the average TV viewer, The Wheel of Time has been—and will continue to be—compared to Game of Thrones, a version of which Jeff Bezos reportedly very much wanted for his then-emerging streaming platform. There are even a few similarities, such as some eerie spirals made of carcasses on the ground and the shared usage of Irish actor Michael McElhatton. (Game of Thrones made it to TV first, but Robert Jordan’s first Wheel of Time book, The Eye of the World, came out more than six years before George R.R. Martin published A Game of Thrones, although both Jordan and Martin were influenced by J.R.R. Tolkien.)

The Wheel of Time is much closer in tone to Lord of the Rings, and it’s a shadow that The Wheel of Time, at times, struggles to escape from. In early episodes, you could draw a very close comparison between the two, but The Wheel of Time fares better as the world opens up and leans more on the unique aspects of its world, it’s got a stellar cast bringing it to life, and it offers just enough to keep you watching.

The Wheel of Time

RELEASE DATE: Nov. 19, 2021
CREATOR: Rafe Judkins
STREAMING: Amazon Prime Video
Based on Robert Jordan’s bestselling fantasy series, a powerful woman discovers and tries to protect five young adults in a remote village, one of whom may be the prophesied Dragon Reborn, a person who has the power or save or break the world. Strong on visuals and with a killer cast at the helm, it sometimes struggles to escape the shadow of its adapted fantasy predecessors.

The Wheel of Time is a vast tapestry set out for us to parse, a point that’s driven home just about every episode as the title sequence plays. Threads are pulled through a loom to form and relay the shape of something much bigger than any single scene or thousands-year-old legend and the sense of which will likely differ depending on your familiarity with the source material.

The visual metaphor makes sense. Even if you haven’t read a single page of Robert Jordan’s bestselling 14-book series and a prequel published over 23 years, spanning over 10,000 pages, and which was concluded with an assist from Brandon Sanderson after Jordan’s death in 2007, it’s clear from its very first moments that Amazon Prime Video’s adaptation is only scratching the surface of its source material. It’s both an attempt to mold a behemoth of a book series into an enticing TV show and not to overwhelm newcomers who will soon become familiar with a wealth of new jargon, world-building, and lore.

And The Wheel of Time throws you into the deep end, a move that’s both a blessing and a curse. It doesn’t assume that its viewers are idiots and hold their hands by including long scenes of exposition and stilted dialogue. But for some newcomers—and, full disclosure, I haven’t read any of The Wheel of Time books yet, but I am a purveyor of fantasy—that approach can be a little overwhelming at first. It’s certainly not an envious position for showrunner Rafe Judkins (Chuck, Agents of S.H.I.E.L.D.) and his writing staff to be in.

They have to introduce a wealth of new characters; concepts like the Aes Sedai (an order of women who can channel energy and elements that’s known as the One Power); Warders (men who bond with an Aes Sedai and are sworn to protect them); creatures known as Trollocs; and a thousands-years-old prophecy. And they have to pull it off in a way that doesn’t feel overly basic for book readers but not just handwaving fantasy nonsense. It takes a couple of episodes for it to feel effortless and part of the story, but it does start to get there. If only to make your entrance into this world a little easier, I’d suggest watching with captions to familiarize yourself with the names of spellings of those places.

The Wheel of Time is set in a world where, thousands of years before the story begins, men tried to cage darkness, leading the world to become broken when they failed, and for women, according to the Aes Sedai Moiraine Damodred (Rosamund Pike), to pick up the pieces. The man once responsible for breaking the world, known as the Dragon, has been born again as an ancient prophecy foretells that this Dragon Reborn has the capability to save the world or break it once again. Now this person is in their 20th year (a slight aging-up from the books), making finding that person a priority for both the Light and the Dark One.

That task has fallen to Moiraine and her warder Lan Mandragoran (Daniel Henney), who’ve spent the past several years traveling all over to look over potential candidates for the Dragon Reborn. They eventually narrow in on Emond’s Field, a mostly isolated village in the Two Rivers region, and five young people who could be the Dragon Reborn: sheepherder Rand al’Thor (Josha Stradowski), innkeeper’s daughter Egwene al’Vere (Madeleine Madden), the blacksmith Perrin Aybara (Marcus Rutherford), gambler and thief Mat Cauthon (Barney Harris), and healer Nynaeve al’Meara (Zoë Robins). Some of them have spent their entire lives in the Two Rivers while others arrived in recent years. When violence breaks through that bubble, they’re told that leaving the Two Rivers to head east to the White Tower (an Aes Sedai stronghold) is the only way to protect their loved ones, but it’s far from the only threat or display of violence, both supernatural and human in nature, they’ll face.

The identity of the Dragon Reborn is one that might arrive early in the book series, but here, it’s a looming mystery that hangs over much of the six episodes (of eight total) made available to critics. Moiraine doesn’t seem to know the answer—and we’re told that the Aes Sedai cannot outright lie by the nature of the oaths they swear—so she and Lan try to protect them all from those threats just in case.

In this version, gender has nothing to do with determining the Dragon Reborn’s identity; the new Dragon could be a man or a woman. It’s just one of the ways that The Wheel of Time attempts to open up and effortlessly diversify the world, which is a far cry from the whiteness of Lord of the Rings and Game of Thrones‘ worlds. Pike might be carrying the series on the shoulders, and she does so with aplomb, but Henney, Madden, and Robins are all among the series’ standouts. But, at times, The Wheel of Time can also be incredibly regressive in its storytelling with a few choices to the detriment of all of the characters caught in the middle of it.

The Wheel of Time is visually stunning. The production design is impeccable, as are many of the detailed costumes (the various Aes Sedai costumes for one, which could’ve easily been designed as one standard uniform, alone!). Much of the tens of millions of dollars Amazon spent on The Wheel of Time is right on the screen, whether it’s shooting amid its Eastern European backdrop or on soundstages. But, despite that outlandish budget, other elements look cheap. The Trollocs, which mostly show up in night scenes with only a handful of close-ups, look unfinished. The depiction of channeling can be both extremely cool in some scenes and cheesy in others. The pacing can occasionally feel slow and meandering—you could probably describe entire stretches as “several characters are traveling from one place to another and talking”—but those scenes, like several of our heroes finding comfort in a song they know the words to but have no idea of its meaning or the story behind it, can be the most rewarding.

“There are neither beginnings nor endings to the turning of the Wheel of Time,” Morraine says toward the end of the first episode. “But it was a beginning.” The Wheel of Time already has a future It’s been renewed for a second season and already recast one of its major roles. The show has a high bar for entry, and it hasn’t had the chance to really distinguish itself from all of the other fantasy shows on TV. But there are enough threads that I’m keen to see more of that woven tapestry come together.

The first three episodes of The Wheel of Time will premiere on Nov. 19. Subsequent episodes will drop on Fridays.