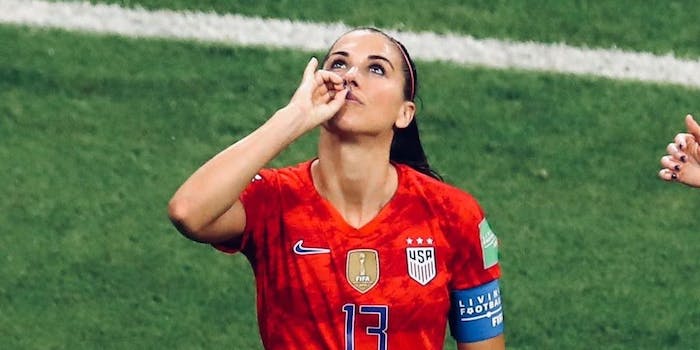 It seems that Megan Rapinoe isn’t the only meme-worthy star of the U.S. Women’s Soccer team. Now fellow forward Alex Morgan has joined the ranks of celebratory memehood.

While Rapinoe’s goal-scoring pose was inspiring, Morgan’s is a downright taunt. After scoring what would be the game-winning goal against England on Tuesday, Morgan celebrated by daintily sipping an imaginary cup of tea.

It was an impressive display of trash-talking (trash-miming?) and there was absolutely no way that Twitter was going to let it go unnoticed.

Of course, it didn’t hurt that the match took place two days before the U.S. celebrates its independence from England.

On behalf of Scotland, thank you. pic.twitter.com/yihqjitjPT

Although some people, like Piers Morgan, felt the display was disrespectful, most people found it delightfully devilish.

When we win this, I hope every one of our players feigns eating a Big Mac and large fries. https://t.co/nNbZ6QI1mW

It’s bordering on a declaration of war. https://t.co/OTvHg4LfeH

"England, you've had to hold this L for 240 years. Tomorrow's July 4th in this country, we've been whooping you via sea, via land and now in your sport… Thank you Alex Morgan!"

— @getnickwright on the @USWNT's 2-1 win over England in the #FIFAWWC pic.twitter.com/brIPfZBpjs

I taught Ruby how to “drink tea like @alexmorgan13” because I’m a good parent pic.twitter.com/JpHX3Lqm2q

Congrats to the #USWNT for earning that tea. On to the final! 🇺🇸 pic.twitter.com/nI8HoMjN1D

Morgan even later admitted that the ladies can “Walk the Talk”, as he wrote in his column.

*NEW: You're cocky, smug, ruthless prima donnas @alexmorgan13 @mPinoe – but you're winners & I doff my tea-drinking pinky finger to you.
My column: https://t.co/iOBP9IjTO5 pic.twitter.com/l1vJIXjgUH

When asked about the controversy the mock tea-sipping brewed, Rapinoe defended her meme-mate by literally saying, “Wah, wah, wah.”

U.S. forward Megan Rapinoe on Alex Morgan's tea cup celebration: "I think I might have been upstaged. That was next-level."

And on English criticism of the tea cup celebration: "Wah, wah, wah… I don't think anyone truly believes we disrespect opponents."@sntvstory pic.twitter.com/XaCgGTsiKq

Adding to the fun, it turns out Morgan scored the game-winning goal, not only two days before America’s birthday, but on her own actual birthday.

Alex Morgan had herself a 30th birthday yesterday.

What was the best birthday you ever had? 🎉 pic.twitter.com/6oUdAPOIQQ

Scoring the winning goal, becoming a meme, and having your team advance to the finals of the World Cup? That’s a pretty good way to celebrate turning 30.