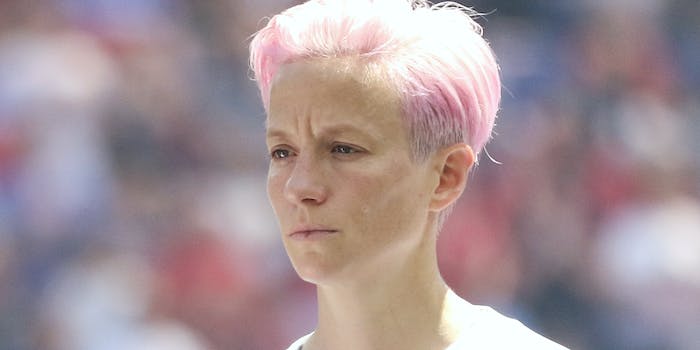 'So the President F*cking Hates My Girlfriend.'

The letter, which was published through the Players’ Tribune, is aptly titled “So the President F*cking Hates My Girlfriend.”

In it, the Women’s National Basketball Association (WNBA) player describes Trump’s rant as him going “full adolescent boy” on Rapinoe. She goes into detail about how it feels to watch someone she loves be the subject of criticism, as well as the success of the Women’s National team in the World Cup.

“Now suddenly you’ve got all these MAGA peeps getting hostile in your mentions,” Bird wrote. “You’ve got all these crazy blogs writing terrible things about this person you care so much about. And now they’re doing takedowns of Megan on Fox News, and who knows whatever else. It’s like an out-of-body experience, really–that’s how I’d describe it.”

Bird wrote that this experience has shown her just how much strength and determination Rapinoe has, who Bird describes as “unapologetically herself.”

“To me it’s more just like: Megan is at the boss level in the video game of knowing herself,” Bird wrote. “She’s always been confident….. but that doesn’t mean she’s always been immune. She’s as sensitive as anyone—maybe more!! She’s just figured out how to harness that sensitivity.”

Once people had a chance to read it, they tweeted about the letter’s wholesome tone and how wonderful it is to be loved and written about in the way Bird wrote about Rapinoe.

“Okay Megan Rapinoe and Sue Bird are the first couple of sports,” Franklin Leonard wrote. “Those are the rules. It’s too late to change them. There are no managers to talk to. Decision is made.”

Okay @mPinoe and @s10bird are the first couple of sports. Those are the rules. It’s too late to change them. There are no managers to talk to. Decision is made. https://t.co/egTIi3xWt0

Find you someone who writes an op-ed about you like Sue Bird does Megan Rapinoe. pic.twitter.com/C7UzRbkSWm

We don't talk enough about what a power couple Megan Rapinoe and Sue Bird are. Between the two of them

No one else comes close to that

i want sue bird and megan rapinoe to adopt me https://t.co/duc0yp1KBU

Lots of great one-liners, but the ending in particular is really sweet. May we all be so lucky to have someone who loves and appreciates us for being ourselves, with all the personality traits that entails. https://t.co/wAZoYVJ47C