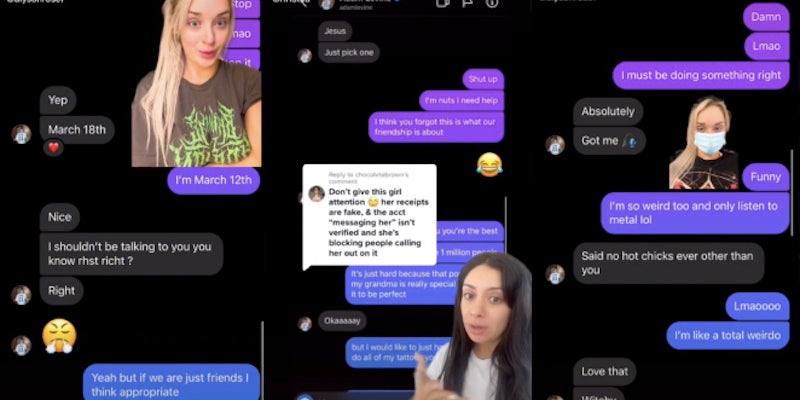 'He did cross the line.'

A second woman came forward with accusations against Adam Levine.

On Monday, Instagram model Sumner Stroh posted a TikTok claiming that she had an affair with the Maroon 5 frontman that lasted a year and culminated in him expressing his desire to name his third child after her, several months after she halted contact with him.

Stroh shared the direct messages she alleged were from Levine’s public Instagram account and said she was led to believe his marriage was over at the time.

After her account went viral, Alyson Rose (@alysonrosef) came forward on TikTok with her own story about interactions she claims to have had with Levine.

According to alleged since-deleted TikTok comments made by Rose, she started talking to the singer after noticing he viewed one of her Instagram Stories. She said, according to screenshots of the comments, they had mutual friends and spoke mostly about tattoos.

She doesn’t allege that they were in a relationship and admits in a video they never met in person. She also says she never flirted with or encouraged him to take their conversations to an inappropriate place, but that’s what happened.

“But he did cross the line,” she wrote in the comments section of her video. “He always was calling me hot and asking me for photos. I literally never complemented [sic] him once lol.”

Rose shared several sets of DMs she claims are from Levine, including one in which he allegedly wrote: “I have 2 kids now I’m over it I want out it sucks now.”

She also posted a screenrecording showing her going into her Instagram account to access the DMs through Levine’s verified page in an effort to push back against those saying the screenshots were faked.

Levine has not responded to either woman directly but did make a blanket statement refuting claims he had an affair.

“I used poor judgment in speaking with anyone other than my wife in ANY kind of flirtatious manner,” he wrote on Instagram Tuesday morning. “I did not have an affair, nevertheless, I crossed the line during a regrettable period in my life. In certain instances it became inappropriate; I have addressed that and taken proactive steps to remedy this with my family.”