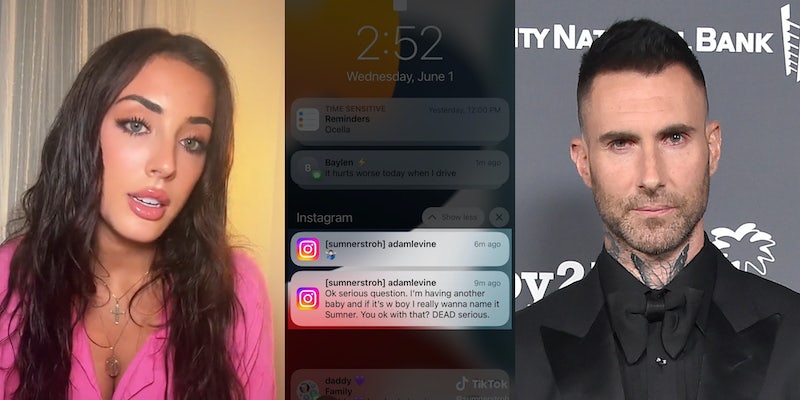 ‘I was completely manipulated’: Instagram model alleges she had an affair with Adam Levine—and he wanted to name his child after her

'Embarrassed I was involved w a man with this utter lack of remorse and respect.'

Instagram model Sumner Stroh says she had a year-long affair with Adam Levine, and she alleges that he wants to name his next baby after her.

Stroh, a 23-year-old University of Texas graduate, posted a TikTok video on Monday detailing her alleged affair. The video quickly went viral with more than two million views as of Monday afternoon.

Levine, 43, has been married to Victoria’s Secret model Behati Prinsloo since 2014, and the alleged affair with Stroh occurred during their marriage. Stroh’s allegations come only three days after Prinsloo confirmed her third pregnancy with Levine by posting a photo of her baby bump on Instagram.

At the time of the alleged fair, Stroh was “young and naive,” she says on TikTok. Looking back on it, she now feels “exploited” by the Maroon 5 singer. She adds that she wasn’t as influential of a model at the time and was easily manipulated.

In her video, Stroh shares alleged screenshots of Instagram messages between herself and Levine. In one message, Levine allegedly says, “It is truly unreal how fucking hot you are. Like it blows my mind.” Stroh’s replies, “I mean I think the same. Seeing u in person I was like… I’m fucked.”

@sumnerstroh embarrassed I was involved w a man with this utter lack of remorse and respect. #greenscreen ♬ original sound – Sumner Stroh

After about a year of seeing him, Stroh stopped talking to Levine. But on June 1, the singer came “back into [her] life” by messaging her on Instagram again, she alleges.

Another screenshot shows an alleged message from Levine. “Ok serious question. I’m having another baby and if it’s [a] boy I really wanna name it Sumner,” it reads. “You ok with that? DEAD serious.”

In the video, Stroh says she “has to be in hell” at this point and seems frustrated at the singer and his request.

“My morals were unknowingly compromised, I was completely manipulated,” Stroh says of the affair.

The model says she didn’t initially want to out the singer and their affair because she “knows the implications” of her career and how it would look if she revealed the truth. She says she “recklessly” sent some screenshots of her messages with Levine to her friends, and one of them attempted to sell them to a tabloid. This led Stroh to come forward with her allegations, she claims.

“Embarrassed I was involved w a man with this utter lack of remorse and respect,” she wrote in the caption of her video..

TikTok viewers had mixed reactions to Stroh’s allegations. Some couldn’t get over the weirdness of Levine wanting to name his child after his mistress.

But most commenters were more concerned with how Stroh phrased her allegations. Several viewers questioned how she was “manipulated” into an affair with a famous man publicly known to be married. Some said her video should have included an apology to Prinsloo.

“… but you knew he was married,” one viewer commented.

“Wait.. why is everyone saying ‘sorry you went through this’ … he was a very publicly married man… how did he manipulate you into having an affair?” a second viewer commented.

A third wrote, “Wait sorry I’m a bit confused when u say your morals were unknowingly compromised and u were manipulated? You knew he was married yet u still engaged?”

Multiple users voiced their support for Prinsloo, saying she was the real victim of the alleged affair.

“It’s no secret he’s been married for a decade. The only victim here is his wife and children,” one user said.

“The word for what you’re feeling is guilt. You weren’t the victim here,” another user wrote.

The Daily Dot reached out to Stroh via TikTok comment and email, as well as to Levine’s representative via email.