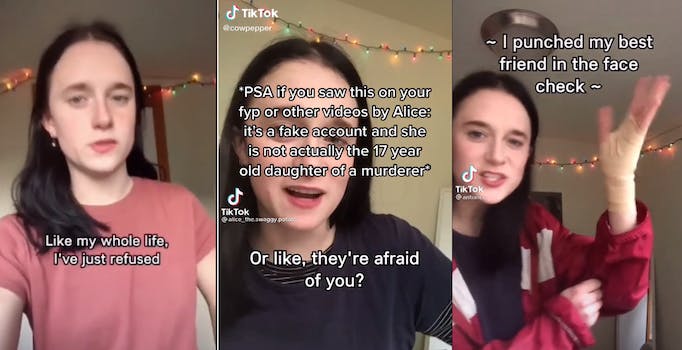 'And here are all these actual teenagers in the comments lauding her as their hero.'

In viral TikTok videos, an actress was called out for impersonating a troubled teenager on a now-deleted TikTok account.

@ninedogsinatrenchcoat posted a video describing an unusual scenario, explaining that she had a “bad gut feeling about something and I need your guys’ opinions.”

She further explained she had met with two high school classmates that had graduated from NYU for a coffee catch-up. In the course, one of them said she “was working on a really cool acting project, and she couldn’t say much about it because she had signed an NDA, but it involved TikTok.”

A few days later, she said she found the alleged 23-year-old actress friend, Nancy Kimball, impersonating a troubled 17-year-old. The problem is that there’s no disclaimer, the accuser said, and people believed her stories, including a tale about punching a “bully in the face” and getting “suspended from school.”

“And here are all these actual teenagers in the comments lauding her as their hero,” she added. “She’s essentially lying to minors online for money.”

The video bringing this to light has more than 925,000 views.

Another video, by @breezyblee, says that the actress also claimed to have a “father who was a murderer” while showing a screenshot of the impersonator in the background.

She also says that people were telling similar, likely real-life stories in the comments of her TikTok videos, believing they were in a safe space.

@cowpepper captured and reposted many of Kimball’s videos apparently cosplaying as a troubled teenager, including her detailing an apparently fake tale of a murderous father and going to therapy.

Kimball has since deleted the TikTok account (@antialice) and made all her social media pages private. We’ve reached out to a representative for Kimball.