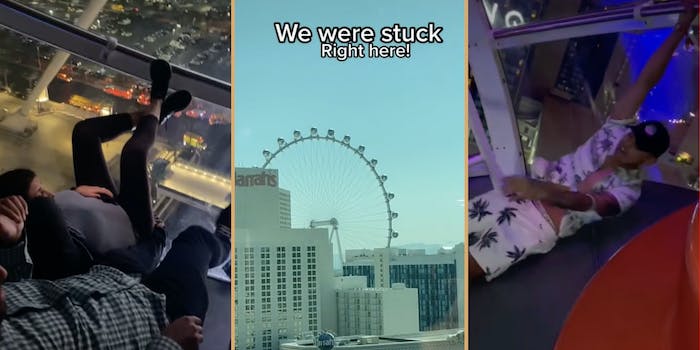 Several passengers were stuck in a tilted pod for over an hour.

Now-viral TikToks captured the moment some passengers were stranded at the top of the world’s highest ferris wheel.

According to local media, the High Roller on the Las Vegas Strip stopped working on Sept. 18, stranding about 150 people for roughly an hour and a half. Passengers were suspended 550 feet in the air while engineers worked to safely disembark them.

Some people on the ride documented the terrifying incident via TikTok, racking up millions of views.

User @mrs.christen said that she “spent all day” convincing her husband to go on the ride. When they got stranded, she noted, “all they would tell us is that they were working on it.”

Another user, @esmyyyyyy shared footage of passengers laying on the floor with their feet pressed against the glass windows as the pod tilts. “Scariest moment ever,” a narrator said over her footage on the ferris wheel.

In a second video, @esmyyyyyy said that everyone “thought we were going to die.”

And a third video of the incident, captured by user @pinedaivan17, shows a man hanging onto a rail “for dear life” to stop himself from dropping to the other side of the tilted pod.

Folks in the tilted pod noted that the vessel was not supposed to tilt. The rest of the pods, such as the one @mrs.christen was in, were allegedly stuck in a straight position.

The ferris wheel wasn’t completely unloaded until after 2 am, according to reports. The malfunction was due to “a network connectivity issue involving one of the cabins,” which caused the ride to stop rotating, the ride’s owner Caesars Entertainment told KTNV.

Engineers were able to resolve the issue and nobody was injured, the company said. Passengers also received refunds.

The Daily Dot reached out to @mrs.christen and @pinedaivan17 via TikTok comment.

Update 5:56 pm CT Sept. 26: In a statement to the Daily Dot, @esmyyyyyy said she was so relieved to be let off the High Roller after the incident. She says she wasn’t sure if she would make it down safely.

“it was frustrating considering how the employees acted as if nothing happened,” she said in an Instagram message. “We asked questions and they pushed us away.”

She also stated the operators did not explain why her car tilted.

“Being on the ground again, it was hard to walk,” she said of the aftermath of the experience. “My entire body (especially my legs) couldn’t stop shaking even after we got off. My knees were giving out, so I just wanted to go back to the hotel to rest.”

She stated that she hadn’t received a refund as of Sunday but explained it would take seven to 10 days.