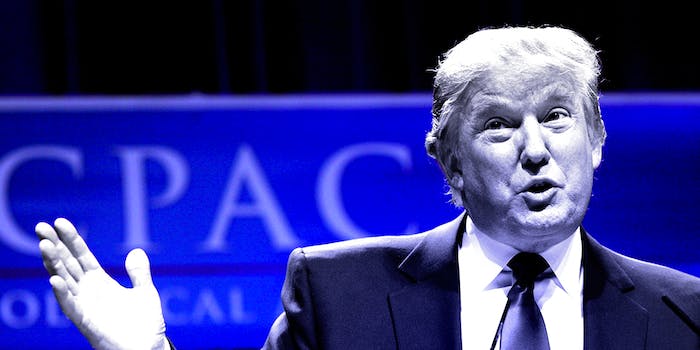 The presidential race is way too long, and the Internet is tired of it.

Does anyone care that our election cycles are getting increasingly longer? If the Republican National Committee is to be believed, then the answer is no. Despite pledging at the beginning of the year to limit the number of presidential debates that it would allow during the 2016 election season, Nancy Reagan will be hosting yet another presidential debate at the Reagan Presidential Library in Simi Valley, Calif. Sixteen candidates will be participating in the September 16 event, with CNN moderating the event. Consider the Internet warned.

“It’s no mystery why things have shifted forward as they have,” explained Alec MacGillis of Slate. He cited the “tendency in the political media to look ahead to the next presidency instead of having to bother with the dregs of this one,” as well as the logistics of financing a modern presidential campaign and the major parties’ desire to resolve the nomination contest as quickly as possible. What’s the problem with that? It’s simple: By extending the length of our presidential elections, we are making them more expensive for the candidates—and less engaging for the voters.

In an op-ed for the Wall Street Journal, historian Michael Barone also attributed this problem to “the presidential nominating process, the weakest part of our political system.” Until the mid-20th century, candidates had been chosen at national conventions by delegates sent there from the state party committees since the 1830s, meaning that no one knew for certain who the actual “frontrunners” were until the assemblies actually took place in the summer before Election Day.

As primaries began to replace national conventions as the method through which presidential nominees were chosen, however, the process naturally lengthened—first to incorporate the immediate weeks before the first primary contest, and then, over time, the months of anticipation over how those primary elections would turn out.

By extending the length of our presidential elections, we are making them more expensive for the candidates—and less engaging for the voters.

Of course, if the only downside of longer presidential election cycles was a proliferation in the quantity (though certainly not quality) of our debates, it wouldn’t necessary be worth writing about. That said, the debates are merely one symptom of this larger problem.

“Lengthy campaigns have at least three harmful results: the candidates are exhausted; campaign costs skyrocket; and the public becomes bored,” found an academic study led by Stephen E. Bennett of the University of Cincinnati. Political experts are already predicting that the 2016 presidential election could cost up to $5 billion, more than doubling the cost of the 2012 presidential election campaign. Even though not a single election has been held or ballot cast, we’ve already seen one candidate (former Texas governor Rick Perry) forced to stop paying his campaign staff because of the exorbitant cost of maintaining a viable operation.

And the river flows both ways: Just as the length of the election season makes campaigning more expensive, the amount of money being poured into political campaigns increases; the Supreme Court’s controversial Citizens United ruling—which prohibits restrictions on independent political expenditures by SuperPACs—virtually guarantees that our elections will be longer. Because contributors want to maximize their influence, they have an incentive to donate as early and often as possible.

Another issue with the length of campaigns is that they distort the public’s perception of which candidates actually have a realistic chance of being nominated.

Even though Lieberman didn’t win the Democratic nomination in 2004, and the 2008 election wound up being a legendary contest between Barack Obama and John McCain rather than a Clinton-Giuliani match, the media has been ignoring this history and treating Donald Trump as the presumptive GOP frontrunner in 2016.

The problem here is that it’s easy for controversial candidates to do well in national polls within their parties so long as there is a diverse field opposing you. As Silver notes, “you can overwhelmingly lose the majority in the referendum—75 percent of Republicans are not voting for Trump—and yet still hold the plurality so long as the “no” vote is divided among a sufficient number of alternatives.”

Just as the length of the election season makes campaigning more expensive, the amount of money being poured into political campaigns increases.

Once actual elections are held and the field begins to shrink, however, those fringe candidates suddenly need to win over moderate voters, a challenge that has so far been insurmountable in the modern political era. This detail provides crucial context in explaining the Trump surge—but the Internet is viewing the surge as a legitimate political phenomenon, rather than an inevitable byproduct of basic arithmetic.

Finally, as the study by Bennett noted, it leads to voter fatigue—especially in an Internet era where political discourse is more omnipresent than ever. Anyone who makes a point of keeping up with American politics has noticed that their loved ones, colleagues, and even casual strangers will remark on Facebook about how they are “over” the election—long before the fateful Tuesday in November rolls around.

Indeed, as FairVote.org has noted, the sheer number of American elections—gubernatorial, county, and municipal, as well as presidential—likely contributes to voter fatigue in its own right. When combined with the fact that presidential contests (which receive far more attention than any other kind of election held in this country) are becoming increasingly drawn out, it stands to reason that voter exhaustion with the political bombardment will only deepen.

This was something that the Republican National Committee took into account in 2013, when it announced that the “number of debates should be reduced by roughly half”—because they didn’t want voters getting weary of their candidates. Chairman Rance Priebus further noted, “We just can’t have MSNBC, you know, hosting a debate at the Reagan Library, only to have their network comment—you know, make the commentary afterwards for three hours about the debate of the Republican Party. I mean, it’s ridiculous.”

That quote could be considered ironic in light of the Reagan Library’s forthcoming debate, but considering the sideshow that this year’s race is already becoming, it’s only appropriate. The 2016 campaign might be a circus, but nearly a year and a half from now, hardly anyone will be laughing at these clowns.

Photo via Gage Skidmore (CC BY 2.0) | Remix by Max Fleishman