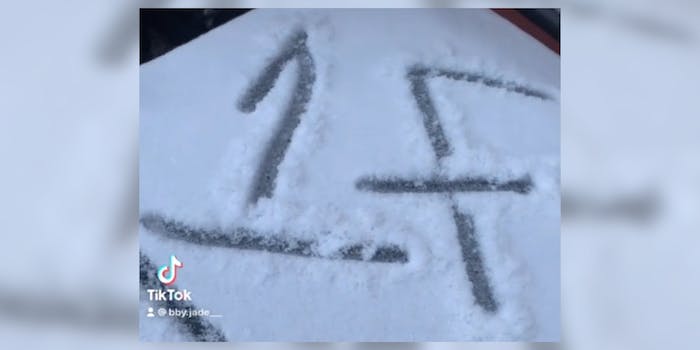 The mysterious marking freaked people out. But it's tied to misinfo about trafficking.

A woman’s viral TikTok about a mysterious marking found in the snow outside her house kicked off a wave of theories—and misinformation.

A Jan. 12 TikTok from user Jade Jules documents “1F” written in the snow on top of her trash bin. The caption reads: “What the fuck does this mean?”

The clip has more than 11 million views, and worried commenters suggested it meant her home had been cased and someone left “one female” behind as a marker. “New fear unlocked,” wrote one commenter. The comments filled up with theories about “1F” being used by kidnappers and sex traffickers.

People urged her to call the police and/or “stay vigilant.” In follow-up videos, she documents cops showing up at the house across the street from her and said she called the police about the message but nothing was done. She allegedly ended up staying with her mother.

Last summer, posts allegedly circulated on Facebook claiming that cars in Humboldt County were being marked with 1F or 1C (one child) by human traffickers, though local law enforcement never confirmed that was true. Snopes debunked the claim in August, after similar posts about a Walmart in New Jersey were unfounded.

And yet, the fear quickly spread across platforms. This Jan. 19 tweet about the 1F TikTok has more than 111,000 retweets, and a majority of the quote tweets treat the claim as real. Some people in the replies pushed back, however.

TikToker bloodbathandbeyond, who addresses hoaxes and misinformation on the app, expressed skepticism over the 1F video, mainly because of who the user tagged—dutchintheusa, a verified TikTok account that spreads misinfo about kidnapping and sex trafficking, including the claim about cars being “marked.” While bloodbathandbeyond doesn’t think the original poster necessarily staged it or actively tried to mislead people, “videos like that will spread misinformation,” she said.

Indeed, TikTok is home to multiple hoaxes and false claims about kidnapping and sex trafficking, and this video appears to be another example of the scope of the problem—and how even people who might just want to spread “awareness” can quickly give way to misinformation.