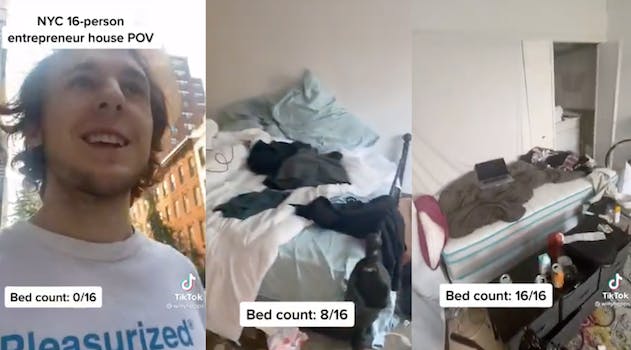 ‘Wish I could unsee every second of this’: People can’t believe this 16-person ‘entrepreneur’ house in NYC

The video even made some viewers sad.

The TikToker who posted the video, @willyhopps, says in the clip that he recently moved into a “mansion” and that he is splitting rent with more than a dozen roommates he met online. He then shows how each of the roommates, who he describes as entrepreneurs, are living.

The video was reposted to Twitter, where users have mixed reactions to the video. Some joked about his over-use of the word “entrepreneur,” while others were interested in the one room he failed to go in.

After deleting the video, he changed his bio on TikTok to say, “Currently hiding from Twitter hatred.”

Since the video was posted to Twitter on Thursday, it has received over 274,000 views and over 6,000 likes.

He makes his way around the four-story brownstone—which includes a makeshift co-working space, a “closet converted into a room,” a kitchen with a security camera, and a movie theater turned into a triple-person room. As he records his roommates’ sleeping quarters, he says, “A wonderful spot that we entrepreneured,” referring to one of his roommates’ beds, which is apparently a 4-foot space and stationed above a closet. This remark left many confused.

@Willyhopps also records the outside of his roommate Camilla’s room and merely points out that she lives there. “This is the part of the story that most intrigues me,” one commenter replied. “The fear in his voice, the fact that she has a room to herself, and that he didn’t open the door tells me something cataclysmic occurred at some point before the video. I need that story.”

Another user screenshotted a comment from the TikTok video before it was deleted that said, “How did you take a gorgeous brownstone and turn it into a war hospital?”

The video even made some viewers sad, with one noting that the living conditions of the 16 people are “horrid” but are being disguised as an entrepreneur setup. “Everyone starts somewhere. What’s the issue?” another questioned.

And others had more simple-minded questions, such as, “How does anyone get any privacy for sexual activities?”