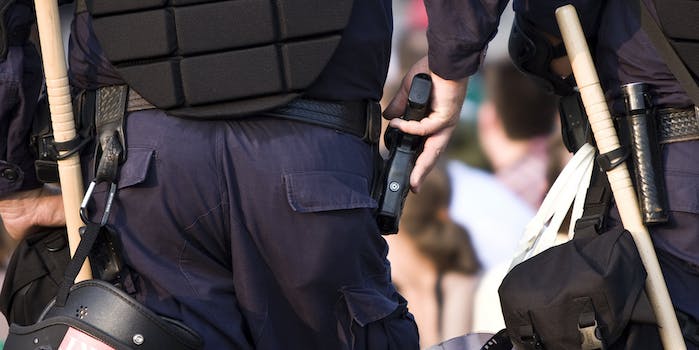 There's putting your foot in your mouth, and then there's kicking yourself in the face.

The situation this week in Ferguson, Mo., was so volatile, with so many unverifiable claims and factors in play, that most descriptions of the chaos feel at once euphemistic and misinformed. The collision of race, police militarization, censorship, violence, and vigilantism have created countless opportunities for commentators to say the exact wrong thing.

As we endure the fifth day of fallout since the death of unarmed teenager Michael Brown, let’s take a moment to shame the people, media outlets, and organizations who really aren’t helping:

Silver may know a thing or 20 about statistical analysis, but his attempt to put a personal spin on the Ferguson tragedy reveals the shallowest sort of empathetic thinking. He, too, was once wrongly arrested, but everything turned out fine because burritos. Explainer journalism!

5. The men never identified themselves as police. I wasn’t 100% sure they WERE police until we got to the precinct.

6. After about an hour in jail, I’m like “sorry guys, was just stressed out and having a rough day … my bad!”

7. Cops suddenly get super chill. Gave me my take-out dinner (a burrito!) to eat in the cell. Let me out an hour later. Even drove me home.

8. Funny now, but super frightening at the time. Everyone has their bad days. Not everyone has a legal monopoly on force.

When confronted with images from Ferguson, there are many words that spring to mind—“shameful,” “heartbreaking,” and “preventable” all fit the mood. If you’re a racist twerp like writer Anthony Rogers, though, you might find yourself comparing the scene to a “rap video” on Thought Catalog, a website devoted to refuting its own claim that “all thinking is relevant.”

In the corridors of power, meanwhile, we have GOP congressman Steve King of Iowa dismissing concerns of racial profiling by riot-ready police on the grounds that the protesters “appear to be of a single, you know, of a single origin, I should say, a continental origin might be the way to phrase that.” Might it? I think it mightn’t be. In fact, King might be a bit of an idiot.

It takes a lot of nerve to shift the blame for political furor over the fatal shooting of an apparently innocent African-American boy by a yet-unnamed police officer to irresponsible black folks. Leave it to Roger Ailes to manage the feat while invoking a martyr of the Civil Rights movement.

It was hard not to root for the hacktivists of Anonymous when they announced #OpFerguson, a campaign intended to prevent law enforcement from protecting the alleged murderer in their midst. They botched that mission, though, by threatening to dox St. Louis County Police Chief John Belmar’s daughter and outing the wrong man as Brown’s shooter. Twitter then suspended the offending account, @TheAnonMessage, sowing greater confusion as group infighting bubbled to the surface.

I just said what I knew, thats all. Drama over, I hope. @TheAnonMessage I am after you “bro”, that was your second BIG mistake in 3 days.

There’s a lot that local law enforcement has done wrong in the wake of Brown’s slaying, from arresting journalists to firing tear gas at peaceful demonstrations to shooting other civilians. Perhaps most egregiously, they released the personal information of nine arrested looters even as they reneged on their commitment to come forward with the name of the police officer who shot Brown. Per Bloomberg’s report on the department’s continued ineptitude:

The chief cited death threats made against the officer and the department. Those threats, while despicable, were predictable. The chief’s about-face only fuels the belief—prevalent among protesters in Ferguson, and widespread among blacks elsewhere—that the police cannot be trusted. In Ferguson, that distrust has also been fueled by the local department’s refusal to release even the most general details about the shooting, such as how many bullets struck Brown.

@TheAnonMessage We will not provide the involved officer’s name or any further information. It is an ongoing investigation.

Bizarre. Police are now refusing to let us into their own press conference regarding #ferguson.

A Business Insider correspondent who mostly tweets about “business, tech, and sports,” Carlson strayed into Ferguson chatter when the Awl published a post about the Drudge Report’s distorted, dog-whistle take on events unfolding there. He mostly seemed concerned, for whatever reason, that someone (something?) was defending the crime of looting small retail stores. If you want a master class in missing the point, you really can’t do much better than this:

@jwherrman to state the obvious: looting is bad. So is militarized cops pointing heavy machine guns at peaceful protesters.

@jwherrman @mattbuchanan I think it is unproductive to take the stance that looting is not a bfd. It is. The point is…

@jwherrman @mattbuchanan the point is that the police response was wrong. The machine gun. The tear gas.

@jwherrman @mattbuchanan I just get annoyed by this sort of one-sided orthodoxy. Looting is awful and stupid.

@jwherrman @mattbuchanan the riot police were as dumb or dumber.

@jwherrman @mattbuchanan shouldn’t we ask reporters to point out both stupidities? Not to ignore one for the other?

Maybe you wouldn’t expect a basketball star to call Rev. Al Sharpton a “coon” for daring to get involved in the black community’s push for justice in the deaths of Brown and Eric Garner, who was choked to death at the hands of an NYPD officer. Nonetheless, that’s exactly what ex-NBA player Gilbert Arenas did in a since-deleted Instagram rant that also implicitly advocated the destruction of rich white residential neighborhoods.

I would like to start off by saying too the family of the victim GOD BLESS#RIPmichealbrown you will be missed: too EVERY African American out there..how dumb are we really???every time we hear some bad news, the first thing we do is #RIOT #ROB #STEAL #BURN sh-t in our OWN neighborhoods..this racism fight has never been #blackvswhite, it’s ALWAYS been #blackvsblack from what the stats.. About 10 riots from the black community over the years and the only thing damaged ,was the BLACK COMMUNITY by The BLACK COMMUNITY..only reason they issue riot police isssss just in case you actually got smart enough to walk 6 blocks ,YALL ain’t f-cking up white rich sh-t smdh

FAMILiES of the victims pleaseeeeee stop asking #alsharpton to speak or ur behalf,you have a better chance having #caesar the monkey from #planetoftheapes to get justice for you..the stats also show AL coon sharpton has not helped one situation he has protested at,he actually made it worst and because of him the jury goes the other way..(think about it) Jena six,trayvon and the list goes back way back..#AL ur like a #THOT in the club,lookn for attention what u said at trayvons rally #enoughisenough ur right were tired of u PRETENDING

A witless talking head bar none, Scarborough took the time to betray his supposed profession by chastising journalists on the ground in Ferguson for disobeying police officers who tried to chase them out of areas where, uh, news was happening. “I am sure I am just the worst person in the world for saying this,” he said, not unjustifiably. “I can only judge how I would treat my son who is a reporter who, if he were in this position, OK, well, you know what? Next time a police officer tells you that you’ve got to move along because you’ve got riots outside, well, you probably should move along.” Washington Post reporter Wesley Lowery, one of those arrested for not moving along quite fast enough, delivered a stinging rebuke on behalf of the country’s free press.

Displaying a mastery of unearned outrage, conservative columnist and commentator Todd Starnes delivered what has to be the single dumbest reaction to Brown’s demise.

Obama sends “deep condolences” to family of MO teen killed after allegedly attacking police officer. No condolences for the cop.

Why didn’t Obama release a statement offering support to the business owners whose stores were looted?

Don’t seem to recall President Obama addressing the nation about all those knockout attacks and violent “flash mobs.”

Yes, why didn’t Obama show a cop under investigation for murder the same compassion he extended to the family of his victim? Maybe because blood was only shed on one side.

Oh, what the hell—almost no one has come off well this week:

Talk about a smug belief in your own superiority. pic.twitter.com/A0e9KIsJXr 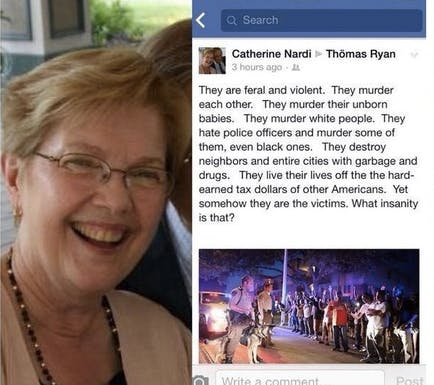 Just saw teargas land right at feet of al-Jazeera America camera crew. They say they were also shot at pic.twitter.com/tbMSlENDlV 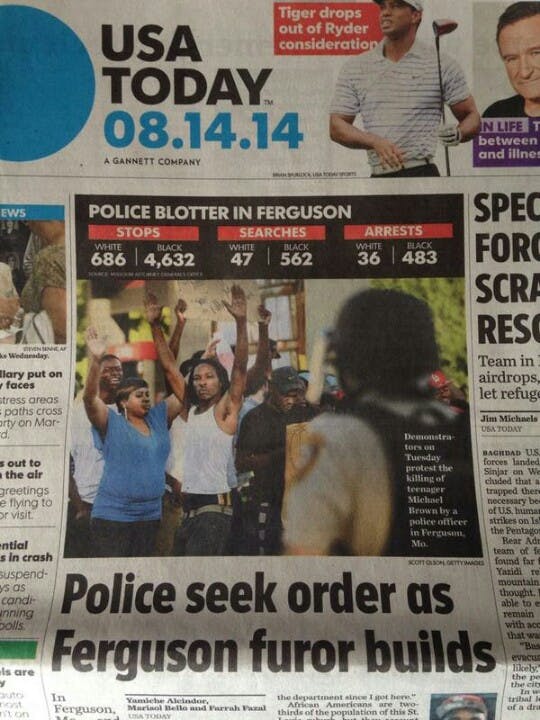