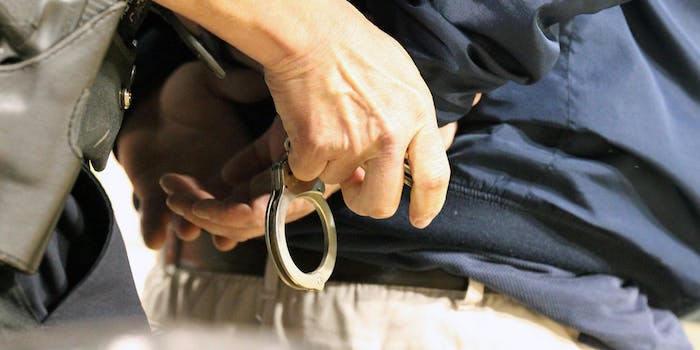 What did police think would happen?

Amidst the chaos of Wednesday night’s protest in Ferguson, Mo., police arrested several journalists. Other reporters withstood fire from police, who shot tear gas and rubber-coated bullets into the gathered crowd.

Washington Post reporter Ryan J. Reilly and Wesley Lowery of the Huffington Post were arrested inside a McDonald’s while filing stories and charging their phones. The two were ordered to evacuate the fast food restaurant, but ended up leaving in restraints. Lowery later tweeted that he had been slammed into a fountain drink machine by an officer.

Outside, heavily armed SWAT teams confronted peaceful protesters on the streets of Ferguson during a fourth day of demonstrations. Citizens of the predominantly black community have gathered every day since teenager Michael Brown, 18, was repeatedly shot and killed by a police officer last Saturday.

Two photos from this evening’s encounter with the SWAT team. It…wasn’t pleasant. pic.twitter.com/TCVqtD1Gni

According to Reilly and Lowery, officers approached them inside the McDonald’s and told them they were in the process of evacuating the area. If the reporters chose to say, police reportedly told them, they would not respond to emergency calls. Both journalists told the officers they would remain where they were. Moments later, the police returned and ordered them to leave the restaurant. Describing the events during a call-in to The Rachel Maddow Show after his release, Lowery said they did everything possible to avoid arrest.

Lowery, who is black, says he dropped everything from his hands and repeatedly told officers, “I’m not resisting.” They replied, “Yes, you are,” he said.

On Up with Chris Hayes later in the evening, Reilly said he was eager to return to the streets and continue reporting on the demonstrations. He remarked that, if he were a 24-year-old black man from Ferguson (instead of a 24-year-old white reporter for the Washington Post) he’d still be in jail. “We need to report these people’s stories,” he told Hayes.

A film crew with Al-Jazeera America was also reportedly attacked by officers and sent running, while tear gas, flashbang grenades, and rubber bullets flew toward them:

“Washington Post reporters have been arrested in two cities this year: Ferguson and Tehran.” tweeted columnist Catherine Rampell. The arrests of Lowery and Reilly were originally spotted by Guardian reporter Jon Swain:

I just called Ferguson police chief to ask about @WesleyLowery and @ryanjreilly, told him what I knew. His response: “Oh, God.”

Both reporters took to twitter following their release to describe the events in detail:

Officers decided we weren’t leaving McDonalds quickly enough, shouldn’t have been taping them.

Refusing to give us any names of the officers

Was waiting to be taken away, large black man SCREAMING for help in back of police truck

Ferguson chief tells me @WesleyLowery and @ryanjreilly‘s arresters were “probably somebody who didn’t know better.”

Across the board, eyewitnesses described the heavily militarized police as overly aggressive in their opposition to mostly peaceful demonstrators. As citizens stood with their arms in the air, chanting “hands up, don’t shoot,” police reportedly trained sniper rifles on them by officers seated atop armed vehicles. Norman Ornstein, a noted political scientist, labelled the events in Ferguson a “police riot.”

At some point in the evening, some demonstrators threw rocks and bottles at officers, according to police, which resulted in the use of tear gas to clear the streets. Molotov cocktailers were spotted in the hands of protesters later in the evening, however, it remained unconfirmed whether or not they had actually been used.

In a statement, St. Louis County Police Chief told members of the press: “We’ve done everything we can to demonstrate a remarkable amount of restraint.”

Just before midnight Wednesday, Governor Jay Nixon cancelled his Thursday appearance at the Missouri State Fair, tweeting that, instead, he would be travelling to the Ferguson area.