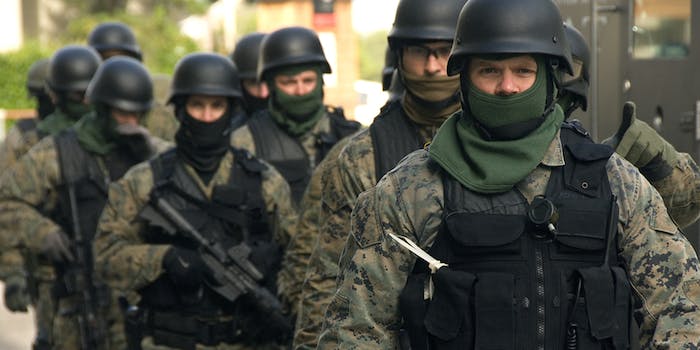 The unidentified subject is in the hospital and listed as being in critical condition.

The St. Louis Post-Disptach is reporting this morning that police have shot a second civilian in of Ferguson, Mo., the town where police shot and killed 18-year-old Michael Brown Saturday. The subject is listed as being in critical condition in a nearby hospital

The second shooting occurred shortly after 1am Wednesday just blocks from the site of Brown’s death. According to St. Louis police spokesman Brian Schellman, the individual was shot after police responded to a report of four men armed with shotguns wearing ski masks in the area.

Police arrived on the scene to see more than two dozen suspects fleeing on foot, Schellman reports. He says that an officer was confronted by one of the fleers, pulled his gun on the subject, and shot him.

Schellman also reports that the injured individual’s handgun was recovered at the scene. Neither the individual nor the officer who shot him have been identified.

The news follows reports that a woman was shot in the head during a drive-by shooting in the neighborhood that same evening. In that incident, Schellman reports, the culprit was one of four or five males driving in a black sedan. The woman was taken to a hospital with injuries, though they’re not considered life-threatening.

Riots have dominated the St. Louis area since police shot and killed Brown Saturday afternoon. The incident has sparked racial tension not seen since since Trayvon Martin’s death, with many suggesting that the problem extends beyond police brutality and into the media’s portrayal of young black Americans in general—and the ways in which both play into each other.

Yesterday, news broke that police in Los Angeles shot and killed another black American, Ezell Ford, a young adult one cousin reported was widely known to have mental issues.

Photo via Oregon Dept of Transportation/Flickr (CC BY 2.0) | Remix by Jason Reed