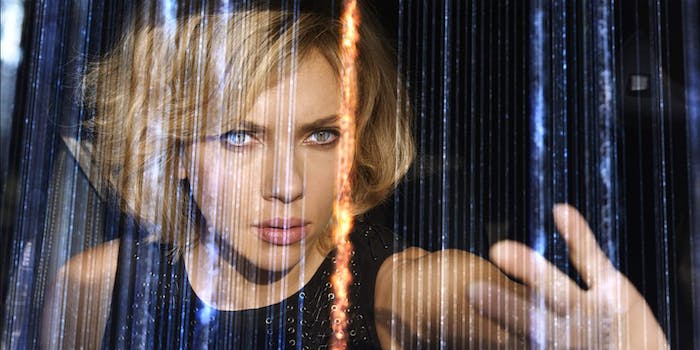 The myth that you only use 10 percent of your brain is ludicrous and scientifically unsound. Tell that to 65 percent of Americans.

“It is estimated most human beings only use 10 percent of the brain’s capacity.” Or so says Morgan Freeman, anyway, in the trailer for the upcoming Scarlett Johansson action vehicle, Lucy.

Lucy would hardly be the first science fiction film to employ bad science. But what makes the 10 percent myth at its core (Lucy accidentally ingests some bad drugs, which allow her to use higher percentages of brain power) so frustrating is how prevalent it continues to be in pop culture. Notable examples of films based off of humans’ supposed inability to harness their full mental capacity from the last few years include Limitless, the Bradley Cooper movie about a man who starts taking a miracle drug (sound familiar?) that makes him infinitely smarter, and Transcendence, which starred Johnny Depp as a scientist exploring the “singularity.”

Lucy, directed by renowned French filmmaker Luc Besson, seems to have decided to double-down on the 10 percent myth particularly hard. Even beyond its premise, the movie’s entire ad campaign, from its taglines to its poster, is based around this idea.

It is true that there’s a lot about the human brain which we still don’t understand. And to be fair, Lucy is a summer action movie and shouldn’t be taken too seriously. But in an age where misconceptions about all things scientific are so prevalent, the movie’s blatant use of this neurological fallacy can’t help but be a little grating.

With Lucy’s arrival on the horizon, The Atlantic’s Sam McDougle looked at the persistence of the 10 percent myth, from its origins amidst the work of famous early 20th century psychologist William James, who theorized that “humans have unused mental potential,” to its understandable appeal in society today.

The 10 percent claim is demonstrably false on a number of levels. First, the entire brain is active all the time. The brain is an organ… In fact, the entire premise of only ‘using’ a certain proportion of your brain is misguided. When your brain works on a problem—turning light that hits your retina into an image, or preparing to reach for a pint of beer, or solving an algebra problem—its effectiveness is as much a question of ‘where’ and ‘when’ as it is of ‘how much’… Still, the appeal of the myth is clear. If we only use 10 percent of our brains, imagine how totally great life would be if we could use more… And that’s why the 10 percent myth, compared with other fantasies, is especially pernicious. It has a distinct air of scientific plausibility—it’s a zippy one-liner with a nice round number, a virus with obvious vectors in pop-psychology books, easy to repeat at cocktail parties.

If McDougle’s careful analysis misses one thing, it’s that the onslaught of the 10 percent myth most likely persists, at least in part, due to the staggering amount of bad pseudoscience that’s constantly being spread online. WebMD alone has pretty much convinced everybody that they’re mini-doctors, capable of diagnosing and treating themselves.

Sure, some of this information is harmless. MDs Joseph A. Diaz, Rebecca A. Griffith, and Anne W. Moulton conducted a study which actually concluded that doctors should be prepared for patients who want to talk about the “facts” they found online. They asserted, “Primary care providers should recognize that patients are using the World Wide Web as a source of medical and health information and should be prepared to offer suggestions for Web-based health resources and to assist patients in evaluating the quality of medical information available on the Internet.”

As everything else in this world becomes digitized, it only makes sense that medicine, to a certain extent, will go the same way too (although hopefully without the bugs of, say, healthcare.gov). But there’s a big difference between using the Internet for general research and getting swept up in paranoia that’ll lead you to believe everything causes cancer.

This is not only a medical issue. Internet pseudoscience is bigger and more muddled than that. And as Chicago Tribune journalist Robert Goldberg puts it, it’s hard to know whether we’re truly “better informed” about science now or if we’re merely “bathing in a tub of bad information.”

Phil Davis of The Scholarly Kitchen offers one explanation for Internet pseudoscience. “The issue of persistent, uncorrected errors in the scientific literature is not new,” Davis writes. “Errors promulgated easily in print journals because readers rarely became aware of editorial notices appearing in later journal issues. Electronic publishing made it much easier to update articles, but for those who routinely download PDF copies to archive on personal computers, getting updates to readers is much more difficult.”

The simpler reality, however, is that the Internet breeds misinformation. This is as true where science is concerned as it is where anything else is. Much as you might like to believe that Neil DeGrasse Tyson and Bill Nye can save us all from our own ignorance, the spread of pseudoscience and general blindness where pure, unadulterated scientific truths should exist isn’t likely to subsist anytime soon.

That doesn’t mean you shouldn’t go see Lucy this weekend. There’s no reason the movie can’t be a good bit of lighthearted fun. Hollywood needs more action heroines, especially when so many of the usual ones fall victim to “Trinity Syndrome” or other myriad issues. And after all, even the best sci-fi movies aren’t immune to criticism.

But if you can go in greeting 10 percent of the Lucy’s premise with a grain of salt, you’ll also be that much more well-informed than the average American.