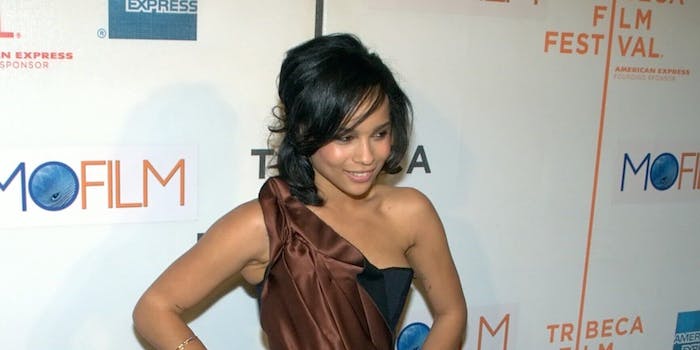 Known for her roles in Big Little Lies and Fantastic Beasts and Where to Find Them, this isn’t Kravitz’s first superhero rodeo. She previously appears as the mutant Angel Salvadore in X-Men: First Class, and actually voiced Catwoman in The Lego Batman Movie.

In a 2015 interview, Kravitz said she couldn’t get an audition for “a small role” in The Dark Knight Rises because the studio decided they weren’t “going urban” with the character, a classic old racist Hollywood euphemism. (Christopher Nolan, it must be said, is not exactly known for championing women of color in his movies.) Landing the Catwoman role is a pretty sweet vindication after that.

Writer/director Matt Reeves’ The Batman is due out in 2021, a new reboot following Ben Affleck‘s decision to step down from playing the caped crusader. Described as a “noir-driven” detective story inspired by Alfred Hitchcock, it won’t make any significant connections to other DC/Warner Bros. movies—unlike Affleck’s role at the center of the dubiously-received Justice League franchise. The overall impression is that this will be a more cerebral Batman, although it’s still expected to keep the accessible PG-13 rating instead of being an adult film like Joker.

After a long period of rewrites and development, it seems that casting for The Batman is now picking up speed. Along with Pattinson and Kravitz, the film will co-star Jeffrey Wright as Jim Gordon. The identity of the film’s main villain is still under wraps, although Jonah Hill is reportedly in talks to play him.