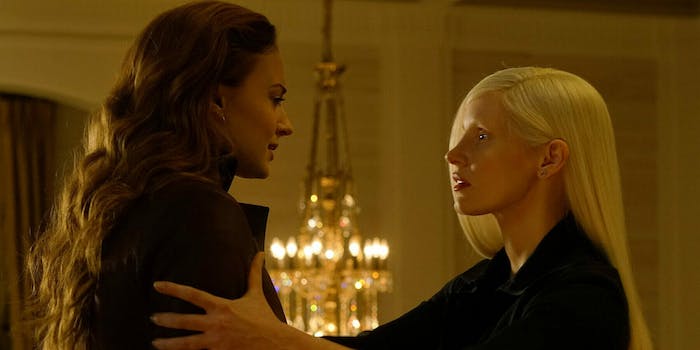 Ever since the Disney/Fox merger, the X-Men franchise has felt like it’s on life support. The promo tour for Dark Phoenix (which comes out next week) is pretty low-key compared to the MCU franchise, and the cast and crew are being surprisingly open about reshoots for this film and New Mutants.

Speaking to Yahoo! Movies, actor James McAvoy revealed that Dark Phoenix‘s reshoots were more extensive than we thought. Why? Because they had to change the entire ending.

“The end changed a hell of a lot,” said McAvoy. “The finale had to change. There was a lot of overlap and parallels with another superhero movie that came out… a while ago.”

McAvoy said that the reshoots improved the movie, an idea that was echoed by his co-stars. “You watched the first two acts and the third act just didn’t feel cohesive,“ said Sophie Turner, who plays Jean Grey/Phoenix. “We went back and re-did all of the third act, and it was such a good decision.“

This obviously invites the question of which superhero film was dangerously similar to Dark Phoenix‘s ending. It has to be something that came out after October 2017, when Dark Phoenix wrapped filming. The smart money’s on either Thor: Ragnarok or Captain Marvel—two superhero movies with space-related concepts that might have something in common with Jean Grey’s Phoenix storyline. It’s possible that Dark Phoenix‘s original ending echoed the finale of Captain Marvel, which revealed the true allegiance of various characters in an interplanetary war.