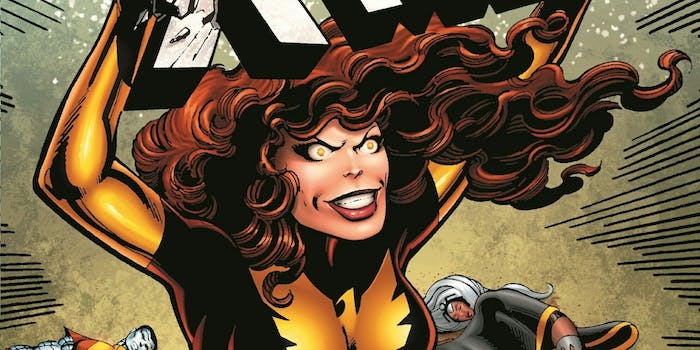 Here's everything you need to know about the original comics.

With X-Men: Dark Phoenix on the way, it’s time to revisit the source material. Written by Chris Claremont and illustrated by John Byrne, the Dark Phoenix saga remains one of the most iconic storylines in X-Men canon. We saw a version of it in the much-maligned X-Men: The Last Stand in 2006, but Dark Phoenix looks like it may be closer to the comics, featuring an alien antagonist and a journey into space.

Split into two parts, the saga covers Jean Grey’s transformation into the super-powerful Phoenix, and then her downfall once that power becomes too strong to control.

If you only have time to read one half of the story, you’re better off with part two, Dark Phoenix (1980). The first half (Uncanny X-Men #101-108, 1976-77) features a lot of dense, dialogue-heavy battle scenes that feel more dated than the character-driven storytelling of later issues—although it still provides an important introduction to Jean Grey’s new powers.

These issues see Jean transform from one of the more “normal” X-Men into someone who could destroy the entire planet, reimagined with a vibrant new costume and flaming hair. John Byrne draws the original Jean like she’s the sweet-hearted heroine of a 1970s romance comic, while Phoenix exudes raw power, her face cast in shadow while her eyes glow blankly out of the page.

Partly thanks to the first X-Men movie trilogy, Jean Grey is now seen as one of Marvel’s most powerful mutants. However, that wasn’t always the case. In her original iteration as Marvel Girl, she was the only female member of the X-Men—and writers didn’t always know what to do with her. The Phoenix Saga changed that role forever, temporarily killing her off (twice) while giving her powers on a completely different scale. Uncanny X-Men #101 kicks things off with Jean Grey sacrificing herself to save the rest of the team, absorbing the Phoenix Force in the process.

While Jean recovers from her quasi-death, we’re introduced to an alien culture called the Shi’ar, whose princess Lilandra forms a psychic bond with Professor X. Fleeing to Earth to escape her despotic brother, she embroils the X-Men in an alien civil war, prompting Jean to embrace the full extent of her psychic and telekinetic abilities. After an epic battle between the X-Men and various aliens, the team returns home in peace—although things can’t fully go back to normal, because Jean is now a figure of godlike power.

As well as being a pivotal moment for Jean, the second half of this story (Uncanny X-Men #129-137) is a turning point for the X-Men in general. When the first comic launched in 1963, the core team were teenagers and Professor X was their teacher. By Uncanny X-Men #129 in 1980, they’re experienced adults, with Cyclops leading a new team including Storm, Wolverine, and Banshee. The Dark Phoenix Saga sets up a generational conflict where Cyclops craves responsibility and Jean seeks freedom, while Professor X still basically sees them as kids. We also meet a couple of key characters for the first time: 13-year-old Kitty Pryde, and Emma Frost, the telepathic White Queen of the Hellfire Club.

Dark Phoenix feels like a response to Jean’s early role as the token female hero of the X-Men comics. She’s often restricted or defined by her relationship to powerful men—her mentor Professor X and her boyfriend Cyclops—and she’s fundamentally isolated from her human parents. The Phoenix Force gives her strength and independence she never had before, but that power separates her from her friends and leaves her open to attack from a new angle.

Our new villains are the secret society known as the Hellfire Club, led by Sebastian Shaw (Kevin Bacon’s character in X-Men: First Class), Emma Frost, and the illusionist Mastermind, who disguises himself as a seductive figure called Jason Wyngarde. As Wyngarde, he manipulates Jean into a psychic love affair that takes place in a facsimile of the 18th century. Basically, it’s a cross between a schlocky historical romance novel and Kylo Ren trying to bring Rey over to the Dark Side in The Last Jedi.

As Jean embraces her Phoenix powers she draws away from Cyclops and the other X-Men, and ultimately falls for Mastermind’s illusions, becoming the Black Queen of the Hellfire Club.

This allegiance is only temporary, as Mastermind is nowhere near powerful enough to control Phoenix for long. But in the end, this conflict was just another stepping stone in Jean’s journey to becoming the Dark Phoenix. No longer invested in her relationships with the other X-Men, Jean evolves into a being of pure energy and leaves Earth. As the Phoenix, she shoots through space and consumes an entire star system as fuel for her powers, massacring a planet of defenseless aliens. At this point, Lilandra and the Shi’ar Empire step in.

Jean’s actions confirm the Shi’ar belief that Phoenix is an apocalyptic force, and alongside leaders from the Kree and Skrull Empires, Lilandra sentences Jean to death. Meanwhile, Xavier manages to put restraints on Jean’s powers, and after a bitter confrontation with her parents, she returns to her former self. Appealing to the aliens’ warrior cultures, Xavier suggests a duel to save Jean from execution. Lilandra accepts, but the ruse is doomed to fail. The Phoenix Force can’t be tamed for long, and as Jean feels herself begin to lose control again, she accepts that she must die.

In later comics, Marvel revealed that the Phoenix Force was a completely separate entity from Jean Grey, and at various points, it takes different hosts including Emma Frost and Cyclops. Still, Phoenix remains a key element of Jean’s story, solidifying her place at the center of the X-Men universe. The new movie is a riff on this arc, combining the Xavier/Magneto feud of earlier films with Jean Grey’s transformation into Dark Phoenix, encouraged by a mysterious alien shapeshifter played by Jessica Chastain.