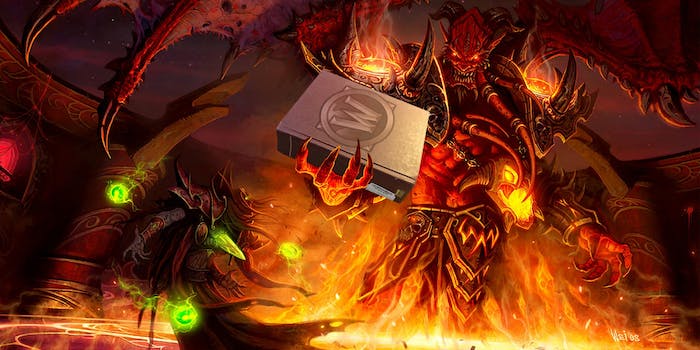 The entire history of ‘World of Warcraft’ in one YouTube video

World of Warcraft, one of the most popular massively multiplayer online games ever created, is built on the back of a tome’s worth of lore. Or a video’s worth, if that’s easier to digest.

YouTube user Nobble87, who also goes by Nobbel the Noble, has produced a huge library of World of Warcraft clips. Among his review and walkthrough videos are storytelling sojourns, accompanied by images and art from the Warcraft universe.

The lore underneath Blizzard Entertainment’s Warcraft franchise begins a full 10 years before World of Warcraft was released. The fantasy world of Azeroth was first introduced to players through a real time strategy game, Warcraft: Orcs and Humans, released in 1994.

Orcs and Humans spawned expansions and sequels through 2003’s Warcraft III: The Frozen Throne, a year before World of Warcraft was released in 2004.

Nobbel87 usually focuses on a single character in his storytelling videos, but for this 40-minute history lesson he makes Azeroth itself the main character, and outlines two decades’ worth of Warcraft lore, from the creation of the universe in which Azeroth resides to the present day state of affairs in World of Warcraft.

Warcraft lore is relevant to players of Hearthstone, an online collectible card game in the vein of Magic: The Gathering, developed by Blizzard. Hearthstone cards often make reference to Warcraft story and characters.

If Hearthstone players don’t feel like paging through interminable WoWWiki pages to get a handle on what their cards are talking about, now they can just queue up this history video. At 40 minutes in length, we have to imagine that the video should eventually roll its way around to an explanation of any Hearthstone card in the deck.