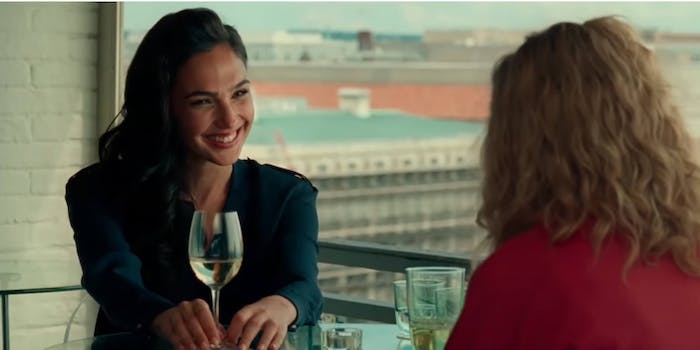 The 'Wonder Woman 1984' discourse is starting.

The trailer for Wonder Woman 1984 transports us to the titular year, where Gal Gadot’s hair is even shinier, shopping malls are thriving, and Wonder Woman is wearing platform boots.

This last detail has apparently become a point of contention—not the overuse of “Blue Monday” in trailers or Steve Trevor’s fanny pack—but Wonder Woman wearing “heels.”

I have only one complaint about the Wonder Woman trailer:

Why is she wearing battle heels? pic.twitter.com/Qt0J9Zw2F3

I see Wonder Woman is still inexplicably wearing wedge heels. Not only are they uncomfortable and not ideal for fighting, but they're ugly.

Later in the trailer, she’s seen running in the boots so it seems like they’re functional, and, as noted elsewhere, Wonder Woman is a goddess and also not real. It was also pointed out that the character wore similar shoes in the past.

When Wonder Woman has been wearing heels (and now boots) since… 1941.

Before its release in 2017, Wonder Woman also saw a stream of outrage and bad takes, as critics told on themselves and people raged against women-only screenings. Wonder Woman 1984, which also features Kristen Wiig as nemesis Cheetah and Pedro Pascal as villain Maxwell Lord, debuts June 5. Over the summer, star Chris Pine relayed an anecdote from director Patty Jenkins that might also apply to the coming discourse: “As a man on screen in a big film, it was interesting because my ego comes out: ‘Well, I want the big f–king fight. Let me climb something.’ And Patty’s like, ‘No, not about you.’ She said ‘not about you’ more times making this film.”