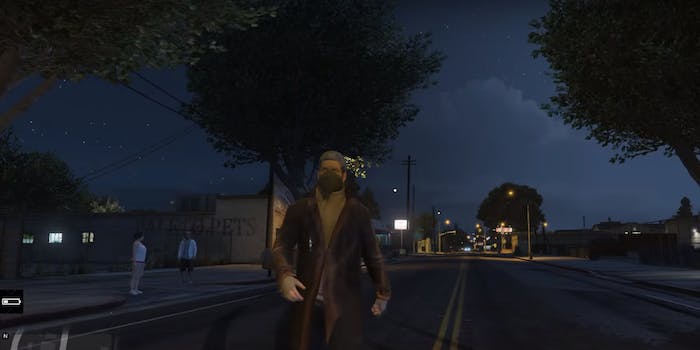 Digital crime is added to the list of wonderfully horrible things you can do in GTA V.

There are all kinds of ways to rain chaos on Los Santos—and now you can add exploding phones, messing with traffic lights, and blowing up electrical transformers to the list.

Modder JuliaNIB, who brought us the Just Cause grappling hook and Iron Man Hulkbuster mods, has just added Watch Dogs-style hacking to his list of mods for the PC version of Grand Theft Auto V. The new mod turns smartphones into de facto grenades, makes fire hydrants into weapons, grants the ability to cause blackouts, and adds retractable traffic barriers to road intersections.

In the open-world game Watch Dogs, you played the role of a cyberterrorist who could hack into smartphones, ATMs, city traffic systems, and cause other digital mayhem. While some critics would tell you that the rest of the game wasn’t very good, messing with people’s technology was plenty of fun.

JuliaNIB’s new mod demonstrates that it’s just as much fun in GTA V.

You can download the Watch_Dogs V hacks script mod here, and if you want to support the work of JuliaNIB, he’s set up a Patreon page for donations.