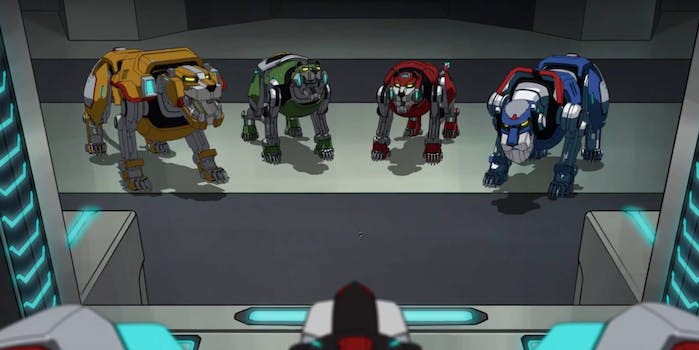 The first trailer for Netflix’s ‘Voltron’ reboot is here

Yes, it's time to watch several small robots team up to become a bigger robot!

Voltron, the classic cartoon where a team of people in mech-suits combine to form a giant space robot, is getting a Netflix reboot.

Voltron: Legendary Defender, a new animated series by Dreamworks, is coming to Netflix on June 10. The first full-length trailer just debuted on YouTube, and it has all the charm of classic Voltron—along with slick, modern animation.

The cartoon sees a group of teenage astronauts battle the evil King Zarkon by piloting robotic lion mech-suits. Judging by the trailer, it’s going to be a fun, anime-influenced reimagining of the original, and there’s plenty of reason to be optimistic if you were a fan of Voltron as a kid.

The new showrunners are Lauren Montgomery and Joaquim Dos Santos, who have an impressive resume including Avatar: The Last Airbender, Legend of Korra, and several DC animated movies. If Voltron turns out to be as addictive as Avatar, we have some good and bad news: It’s only 13 episodes long. On the bright side, that means it won’t eat up days of your time if you decide to binge-watch the whole thing at once.