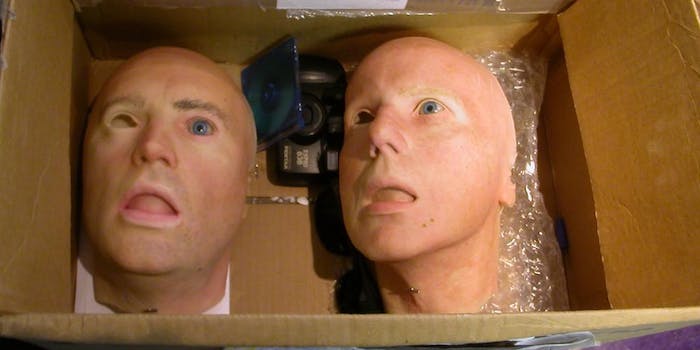 If only these 'Swamp Thing' and 'Neuromancer' movies were actually happening.

Vincenzo Natali’s Twitter feed is a real treasure-trove at the moment.

He started tweeting some behind-the-scenes details to coincide with last week’s season premiere, and just… didn’t stop. Following Hannibal he kept posting storyboards and concept art from various projects he’s worked on over the years, and some of it is very cool.

My storyboard for the #HannibalSeason3 #Antipasto opening. Originally was to include Rodin's Gates of Hell sculpture. pic.twitter.com/TdoTmYdmNX

Storyboards from #Hannibal Nako-choko. Will fights the Stagman. Art by Matt Taylor. pic.twitter.com/DYcyx9Kot9

Natali’s script excerpts and concept art range from movies like Splice to films that never got made (Swamp Thing, The Chrysalids) or are still stuck in development hell (cyberpunk classic Neuromancer).

Four pages from my screenplay for #Neuromancer. pic.twitter.com/blHZhgy8qt

As of last month, the Neuromancer movie is supposedly back in development—without Natali this time round. That’s too bad, because this concept art gives us a glimpse of what could have been.

And inside the Villa Straylight. pic.twitter.com/JcXFm1BiSi

Perhaps best of all, Natali posted the first few pages of his screenplay for Swamp Thing, a DC/Vertigo comics movie that was originally slated for production around 2010.

Swamp Thing was previously adapted in the 1980s by Wes Craven, simplifying the comic into a monster movie concept. A more loyal adaptation would have more in common with Sandman than a typical comic book movie with hero and villain roles, which is probably why Swamp Thing never went into production. It’s difficult to sell a philosophical and romantic drama story about a dude made of mud and swamp tendrils.

The first four pages of my aborted #SwampThing script. pic.twitter.com/umWSpUJRZs

@Vincenzo_Natali you are the perfect person for Swamp Thing, will it happen one day though?

@supermarcey File under "highly unlikely, but not impossible"