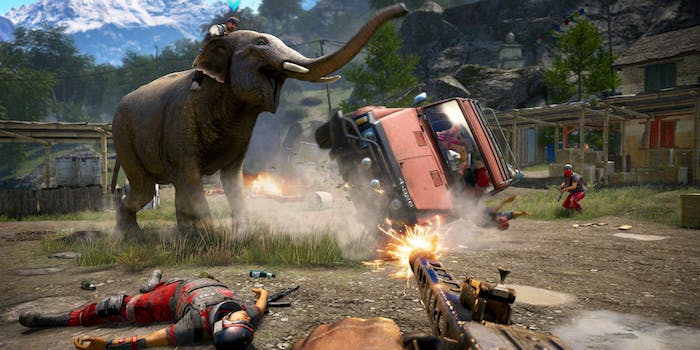 Generally-speaking, it’s a bad idea to yell “I totally just stole something from you!” as you’re sprinting out the door of a store.

Generally-speaking, it’s a bad idea to yell “I totally just stole something from you!” as you’re sprinting out the door of a store, with pilfered goods. Yet people on social media are doing just that.

In a novel approach to fighting game piracy, Ubisoft decided to make a field of view (FOV) slider, something that players could access only if they downloaded a day one patch for the game. They could only download the day one patch if they bought the game legitimately. Therefore, anyone complaining about not having the FOV slider has outed themselves as having pirated Far Cry 4.

Imagine adjusting the FOV slider in a game as taking images that would otherwise be in your peripheral vision, and moving them closer to the center of your eyeline. In a first person shooter, expanding the field of vision can make for greater situational awareness. It also allows the player to see more of the environment just for the sake of enjoying the imagery. And in a franchise like Far Cry, which prides itself on putting the player into compelling, open worlds, you just might want to widen your field of view for pure enjoyment of the aesthetics.

Imagine then if you have a copy of the game on PC, which has the potential to be the most graphically impressive version of Far Cry 4, and you don’t have a FOV slider. That’s a reasonable complaint, right? And gamers being gamers, they don’t just complain. They scream their complaints from the top of the highest hill they can climb. Which is precisely what Ubisoft would want them to do, having laid this trap.

PC players! If you’re online complaining about the lack of FOV control … You pirated the game.

The CEO of Ubisoft, Yves Guillemot, has reported piracy rates of Ubisoft games on PC as high as 95 percent. Surely no one can blame Ubisoft for doing what it can to help video game thieves announce their presence to the world, right?