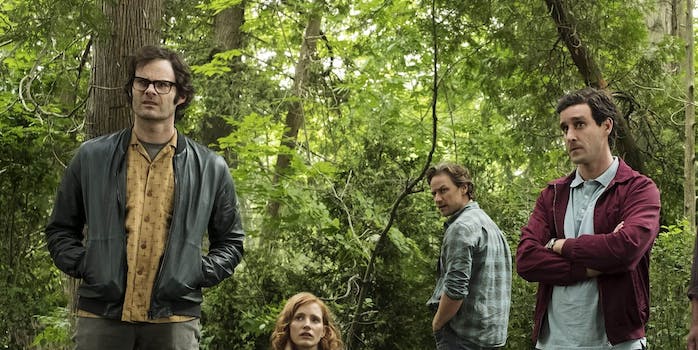 Over on Tumblr, Richie and Eddie from 'It' are more popular than Marvel or Star Wars.

For the past four months, the most popular ship on Tumblr has been two guys from Stephen King’s It. To give you an idea of what we’re dealing with here, they’re trending higher than characters from Star Wars, Marvel, and BTS. Thanks to Tumblr’s Fandometrics page—essentially the Billboard chart of fandom—you can track the moment when they hit the #1 spot, right after It: Chapter Two came out in September. Their popularity says a lot about what kind of ideas catch on in shipping fandom.

The characters in question are Richie Tozier and Eddie Kaspbrak (ship name Reddie), two of the seven friends terrorized by Pennywise the Clown in It. In the first movie, they’re kids played by Stranger Things star Finn Wolfhard and Jack Dylan Grazer, while in the sequel they’re adults played by Bill Hader and James Ransome. Playing the role of comic relief, they’re a bickering duo of foul-mouthed tweens who grow up to be a douchey comedian (Richie) and a neurotic, hypochondriac office drone (Eddie).

Crucially, It: Chapter Two confirms that Richie is gay and had a crush on Eddie when they were kids, although this attempt at queer representation is so subtle and poorly-handled that many viewers probably didn’t even notice. Tumblr shippers did, though. Plenty of It fans actually picked up on the Reddie subtext from the first movie, and of the 8000 fanfics on Archive of our Own, almost half were posted before the second movie came out. That’s when we learn that Richie carved his and Eddie’s initials onto the “kissing bridge” in their home town. Of course, (spoiler alert!) we only learn this after Eddie dies a gory death at the hands of Pennywise. They don’t get together, and Eddie is married to a woman. As examples of queer representation go, the It franchise is hardly impressive. Chapter Two opens with a brutal gay-bashing scene, and Richie is portrayed as a closeted loner who’s still hung up on his childhood friend—who then gets murdered, leaving Richie alone while his four straight friends get happy endings. So, how did this problematic pairing become a fandom juggernaut?

Flawed source material often inspires more fanfic than a perfect, universally-adored canon. That’s kind of the point of fanworks: to correct problems with the original text, or to fill in the gaps. The vast majority of popular ships aren’t canon, and when they are—say, the many romances in Riverdale or The 100—they generally aren’t locked into happy, satisfying endings. If the source material gives you what you want, then there’s less motivation to write fanfic. In the case of the It movies, fans got a tiny taste of what they wanted… and then cooked a delicious feast for themselves.

While the movies barely go any further than suggesting Richie had a crush on Eddie, fans delved into the psychology behind why he stayed in the closet as an adult, examining small-town homophobia and finding ways to give him and Eddie a happy ending. Some turn back the clock and allow them to figure out their feelings as teenagers, while others rejig the ending so they can get together as adults. Richie’s celebrity status is a popular theme, transforming him from hack comedian to internet-savvy gay icon. Between Eddie’s troubled childhood at the hands of a controlling mother, and Richie’s potential for a public coming-out story, both characters contain the building blocks for a meaningful story about queer identity.

Along with the desire to rewrite an unfinished canon romance, there’s a more controversial reason why Reddie is such a hit. English-language slash fandom has a long history of communities moving en masse to ship the latest trendy pair of white guys. Sometimes called “migratory slash fandom,” it’s a widely recognized phenomenon, with fanfic audiences latching onto mainstream hits like Sherlock and Supernatural, along with more unexpected choices like two of the side characters from Inception, or James Bond and Q. The popularity of white male pairings is partly due to the overabundance of white men in pop culture, but there are some pretty obvious biases at play as well.

Over and over again, fans gravitate toward “two white guys” pairings with minor roles (like Hawkeye and Agent Coulson, who barely share any screentime in the MCU) while ignoring characters of color (like Rhodey in the Iron Man movies). Star Wars is one of the more infamous examples, because while Finn and Poe get plenty of media attention, Kylo Ren and General Hux have a more active fandom, producing almost twice as much fanfic. In the diverse new era of the Star Wars franchise, the most popular romantic lead is a white male villain.

This isn’t to say there’s anything intrinsically wrong with shipping two white guys. It’s just that demographic trends suggest fan-created media can fall into the same traps as mainstream pop culture. We’re used to consuming media about white men, and it’s hard to shake the habit. In turn, there’s an ecosystem of fanfic writers and readers attuned to a certain framework of storytelling and character dynamics, which is why it’s easy to jump from Sherlock to Supernatural to Teen Wolf. It can be hard to accept that while fandom is seen as a subversive, feminist, queer-friendly space, in some ways it’s surprisingly similar to the conservative output of Hollywood media.

The It movies fulfill a bunch of tropes that fanfic audiences love, and the “two white guys” thing is just one of them. The main cast are the quintessential found-family group of misfits, supporting each other through childhood trauma and a supernatural quest. The characters exchange snappy banter and exist in the simple template of small-town America, making it easy to write high school romances or familiar AUs. You don’t have to absorb much worldbuilding or struggle with new narrative concepts to write It fanfic; you can just jump right in. So while It is a gruesome horror story and the fanfic tackles intense topics like internalized homophobia, Reddie still counts as comfort reading.

Tumblr released its Year In Review stats last week, and judging by the top 100 ships list, old-school migratory slash fandom is less of a driving force than it was in the past. The #1 ship is Aziraphale and Crowley from Good Omens (no surprises there), but the rest of the top ten is a diverse group, including two female characters in the Spanish-language drama Amar e Muerte, a pairing from BTS, and Reylo from Star Wars. Reddie clocked in at #4 overall. Likely to wind down over the next few months (there aren’t any more It movies coming out, after all), Reddie’s popularity is a perfect example of fan culture’s complicated politics. A pairing that plays into problematic trends, while repurposing a flawed movie into a shared narrative about defeating homophobia by living your best life.