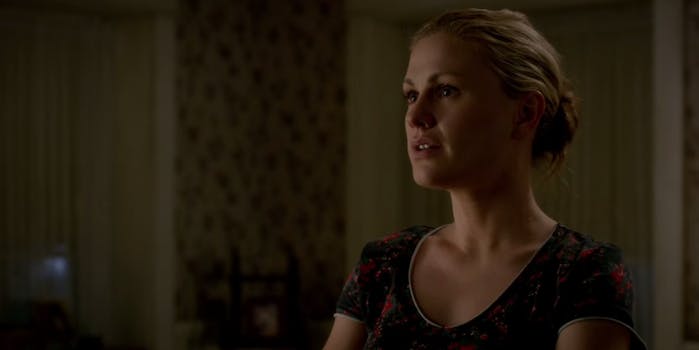 Fans were less than satisfied about the show's final offering.

Warning: This article contains spoilers for the final episode of True Blood.

The Sopranos series finale’s abrupt cut to black sparked outrage and debate in 2007, launching a new era of Internet scrutiny when it comes to the final episode of big TV shows. (Of course we were griping about series finales long before that. We’re look at you, Seinfeld.) You have the satisfying with Breaking Bad, the mixed reviews with Lost, and in more recent memory, the abysmal with Dexter and How I Met Your Mother. If the Internet is any indicator, True Blood’s finale will go hand-in-hand with the lattermost.

In True Blood standards, it was a rather tame episode in a series that saw a vampire rip out the heart of a news anchor on live television, nudity, nudity, and more nudity, werepanthers, and even a vampire-esque concentration camp. The final episode featured no nudity, most of the bad guys got what they deserved, mostly everyone ended up happy in the end, and there was only one major death: the ever-noble (and sometimes ever-frustrating) Bill Compton, already dying from Hepatitis V, who got staked by love Sookie Stackhouse after she refused to use the last of her faery light to give herself a more human life.

The show promised to return to its roots this season, and when episodes are almost constantly marked by death and danger, the lack of it deprived the episode of much of its tension. For some the end of the series felt downright dull.

Dear #TrueBlood can I have the last few seasons of my life back?

In case anyone cares whether or not the #TrueBlood finale is any good… I just went to the bathroom and didn’t bother to pause the DVR.

But the dullness of it all wasn’t the only thing the Internet found wrong with it.

As soon as the final credits aired, the Dexter comparisons started rolling in and people quickly voiced their displeasure at what they just watched.

Dear Dexter. Please hand back your award for Worst Finale Series. #TrueBlood is waiting for it.

The only way that #TrueBlood finale could have been any worse was if Bill would have become a lumberjack in the end. #Dexter

They definitely wanted their money back.

Absolutely disappointed with the writers of @TrueBloodHBO for allowing the final season to be so lackluster. #truebloodfinale

Dear @TrueBloodHBO I would like a refund on the 7years I paid for @HBO. That writer should NEVER work AGAIN! #TrueBlood #truebloodfinale

I can’t believe I wasted 92 hours of my life watching #TrueBlood with that stupid series finale. What the hell. #truebloodfinale

Hoyt and Jessica only reunited last episode, but they were already getting married. Surrounded by family and human friends (since it was daytime), they wed in a ceremony that may not have been legal but stood as a metaphor for gay marriage—but it was poorly contrived.

Thank god someone listened to the fans that said “I hope True Blood’s finale ignores all the good stories and just has a random wedding!”

Fans spent much of the series wondering whether Sookie would end up with Bill or the 1,000-year-old Viking Eric Northman, but in reality it was neither. She ends up with a faceless bearded man whose back faces the camera the entire time, and in flashforwards it’s revealed that she’s very pregnant. And fans aren’t having it. (At least Eric and Pam ended up rich, right?)

The life lesson I am taking from the finale of True Blood is sometimes you have to kill your boyfriend to find a much better boyfriend.

somebody call Maury. Sookie is pregnant & I wanna know WHO DA BABY DADDY IS!! #TrueBlood #truebloodfinale

After all that and they didn’t even show who Sookie was with, at the end #Trueblood

And a fan favorite didn’t get a single line of dialogue.

If the True Blood finale isn’t Eric, Pam and Lafayette being vulgar, hilarious and naked then I don’t care to watch it.

Maybe they should’ve made the season finale longer. I mean, we only got to see Lafayette for a second at the end. Who does that? #TrueBlood

Wait seriously Lafayette didn’t even get in any LINES in the series finale? REALLY? #TrueBlood

“Lafayette was the most compelling character on the show, and he got a grand total of nothing to do on the finale,” Margaret Lyons wrote for Vulture. “This is what scientists call ‘some bullshit.’”

But people managed to find the good in the episode. It ended with Led Zeppelin’s “Thank You” playing in the credits, and it gave us this image of Eric bound to be used forever more in GIF form.

And that’s pretty much it.