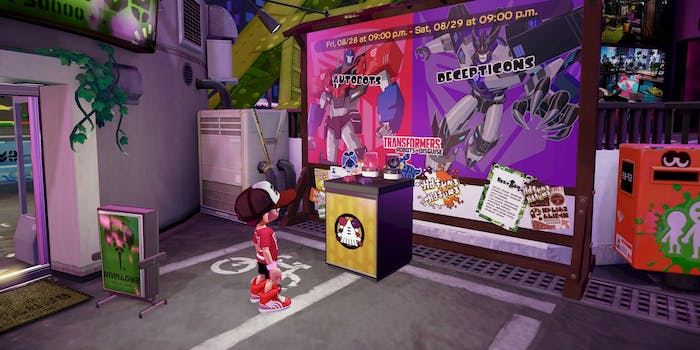 Splatoon teams to square off as Autobots and Decepticons

Two new factions will face off in the next Splatfest.

The Autobots and Decepticons will fight for loot and bragging rights in this month’s Splatfest in Nintendo’s Wii U-exclusive online team-based shooter Splatoon.

Splatfests are 24-hour Splatoon events where players choose one of two sides and then duke it out in Turf War matches to score points for their side. The next Splatfest, which begins at 9pm PT Aug. 28 will let Splatoon players choose to fight for the Autobots or the Decepticons.

The T-shirts designating each team are pretty cool. The Decepticon shirt is obviously cooler. So happens if more people choose the Decepticons over the Autobots? When developer Jagex beta tested Transformers Online, it estimated that 60 percent of players chose the Decepticons.

Nintendo hopefully has a scheme to keep things fair, because whichever team wins a Splatfest also earns currency to upgrade their gear.