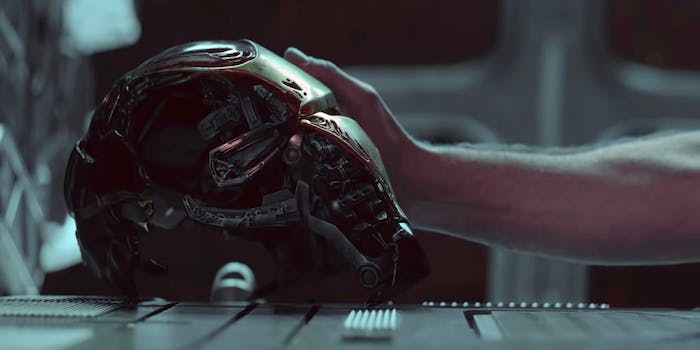 Why is Tony Stark missing from the ‘Spider-Man: Far From Home’ trailer?

Is he dead, or just out of sight?

In the first trailer for Spider-Man: Far From Home, fans got their first look at everything from all of Spider-Man’s new suits to Marvel villain (and possible ally) Mysterio. But there was something (or rather, someone) missing from the trailer: Tony Stark (aka Iron Man).

If this were Spider-Man: Homecoming (in which Tony Stark played a mentor role for Peter), we probably wouldn’t have batted an eye over Tony Stark’s absence. Hell, we’re pretty blasé about the fact that none of the other Marvel superheroes who could feasibly show up in Peter’s corner of the Marvel Cinematic Universe in Far From Home are M.I.A. (One of Peter’s classmates name-checks Iron Man and Thor while watching a news report about Mysterio in the trailer.)

When Tony Stark isn’t in the trailer
pic.twitter.com/O6GZpoy8xq#SpidermanFarFromHome

Except it’s different this time around: Spider-Man: Far From Home is the first MCU film to be released after Avengers: Endgame. Although the trailer doesn’t acknowledge Thanos’ snap or anything that happens in Endgame, Far From Home almost certainly takes place after Endgame; Sony producer Amy Pascal also said as much to Fandom in 2017, noting that the Spider-Man sequel “will start a few minutes after Avengers 4 wraps as a story.”)

Given that Peter Parker was among the half of the universe that turned to dust in Infinity War, we now know that he’s somehow brought back to life in Endgame. Which, between Far From Home’s confirmation as a movie and Homecoming’s box office haul, was kind of a no-brainer.

As for the rest of the MCU’s superheroes who don’t have sequels confirmed or in the works? It’s far less certain, and no character encapsulates that more than Tony Stark.

Between how we left Tony Stark in Infinity War and what we’ve seen of him in Endgame so far, Tony is not in a good place at all. He fought tooth and nail against Thanos and the Black Order and saw Thanos win anyway, and his mentee died in his arms. And on that space ship, he uses some of the remaining oxygen onboard to record a farewell message to Pepper Potts. He’s essentially got nothing left to lose, which could set himself up to potentially make a crucial sacrifice to restore half the universe.

Which, if that’s how it plays out, would easily explain his absence from Far From Home.

Instead of Tony being the Avengers and S.H.I.E.L.D.-adjacent character to interact with Peter, it’s Nick Fury and Happy Hogan who recruit him and potentially give him suit upgrades. Some have even pointed to Pepper Potts’ signature on the Stark Relief Foundation check to benefit a homeless shelter as proof, not to mention Peter’s hesitation in packing his Spider-Man suit for his European trip. (Aunt May felt otherwise and packed it for him.)

Robert Downey Jr. hasn’t signed on for any Marvel movies beyond Endgame, and he isn’t among the confirmed cast.

Tony Stark is not dead

For every piece of evidence that argues that Tony Stark is dead, you can also argue that he’s still a part of the MCU. But why would he be absent from the Far From Home trailer if he’s still alive? Because having him show up would be an even bigger spoiler than Spider-Man coming back to life.

i don't know whether far from home confirmed tony stark is dead or alive, i literally see both possibilities from the trailer.

If Tony takes a backseat in general after Endgame—and allows the younger heroes (and actors who still have contracts with Marvel) to take over—his involvement in Far From Home could be minimal. He hasn’t been in charge of Stark Industries since he stepped down from the company in Iron Man 2 and gave Pepper control of it. As CEO, her signage of the Stark Relief Foundation check makes sense. Tony’s influence on him might not be the only possible reason he doesn’t want to take the suit with him to Europe.

And if any of that’s the case, it also involved maneuvering and sneaking of the highest order to get Downey Jr. onto the set of Far From Home without astute set watchers and paparazzi from photographing any of it. If Marvel and Sony can pull all of that off, kudos to them.

The important thing to remember

Right now, fans have plenty of ideas about what may or may not have happened to Tony Stark in Endgame to lead to his absence from the Far From Home trailer. Regardless of how it shakes out between now and April (and now and July), there’s one important thing we should keep in mind: Marvel trailers often lie.

We might see epic sequences, such as that one shot from Infinity War where Captain America and Black Panther lead a super-powered team (and Wakanda’s army) to battle, that will never make the film; the Hulk doesn’t even show up for the Battle of Wakanda. Thanos’ gauntlet is also missing several Infinity stones when Captain America tries to stop it with his bare hands in Wakanda.

Tony Stark’s last appearance in a Spider-Man movie is another example. While Tony heavily featured in trailers for Homecoming (including one shot of Iron Man and Spider-Man in the air together), he’s barely even in the movie; according to one breakdown, Tony has just eight minutes of screentime.

To give you a minor example of that in the Far From Home teaser, take a look at Peter Parker’s passport. We get a glimpse of the interior to laugh at Peter’s expression in his passport photo, but in the process, we notice something else instead: All of the years—Peter’s birth year, the year he received his passport, and when it expires—are missing from Peter’s passport.

The exclusion of those years could be a way that Sony and Marvel could argue that Far From Home’s timeline is more ambiguous than it probably is until Endgame is released in theaters.

It’s plenty of fun to try and parse out all of the details in a two-and-a-half-minute teaser and see what clues regarding what happened to Tony Stark are hidden within. It’s probably too early to declare one way or another what Tony Stark’s fate is—and you’ll likely fall into whatever camp you’ve already settled on—but until Endgame comes out and shows us, we can easily get the best of both worlds.